At the end of his first week's work experience and endjin, Jack, 15, describes an endjin "Show & Tell" that took an exciting turn into spiking a new feature, with burgers and all...

On Friday I got into the office around 9:00ish. In the morning I watched some more videos on Pluralsight to help me understand a bit more about programming. Nothing could prepare for what I was going to witness in the afternoon. Around 1:30 we ordered lunch from Red Dog saloon. I ordered the Signature burger, some fries and a strawberry milkshake. When it arrived we all went upstairs for the weekly "Show & Tell" meeting, where everybody was going to present what they have achieved for the week. When we got up there I saw that Howard had also ordered a huge amount of wings amongst other things, so I knew that this was going to be a great meeting!

While eating my burger, Howard gave a short talk about some of the client work that had been carried out during the week and also some exciting new Microsoft Azure features that had just been announced. Next, Matthew presented what he had done for the week. After a very interesting 20 minute talk, a discussion/debate between Howard and Matthew came up about whether endjin's new content management system should let users add their own features through the user interface rather than via an Integrated Development Environment like Visual Studio as some of the users probably wouldn't have access to this tool. After coming to an agreement or possibly a stalemate they decided to try and solve the problem by Matthew trying to create the basics of the feature there and then.

What came next is what I can describe as a master class in coding. Matthew seamlessly worked through creating a new plugin for the website. Here drew upon other pieces of code he had written to try and aid him on the new one. After understanding (kinda) what he was doing I watched as he then tried to run the code. This is where I learnt that programmers have endless patience, as unfortunately the code didn't work first time. So for the next 20-30 minutes Matthew tried to find the problem (which turned out to be multiple problems) with the code. While I was struggling to comprehend what was going on let alone why it didn't work Matthew was working through each line "debugging" it. By the time he had almost finished I felt physically and mentally drained by watching it. But when it finally worked it was met by cheers and a round of applause.

After that Richard took to the stage to show what he had been up to. He had been doing some client work to change their search engine from Amazon Cloud Search to ElasticSearch, which would be much more cost effective. He demonstrated setting up an ElasticSearch cluster automatically in the cloud on Microsoft Azure using a tool called PowerShell. After a very complicated talk, Alice came up and did a talk on what she had been doing, which entailed adding a new feature to a client's web application and creating automated tests to prove the feature worked using a tool called Selenium which ran on a website called SauceLabs. This is when we noticed that Mike had made a poor attempt on his burger after filling himself on chips and wings. A sure fire case of having eyes bigger than his stomach!

Pascal then came up and gave a presentation on what he had been doing this week; which involved adding some finishing touches to a framework that make it easier to write automated web tests - the framework that Alice had been using.

Mike then gave a summary of the work he and Howard had been doing which was on endjin's new licensing framework; it was an important feature for the new content management system, but they had built this in a way that it could be used by desktop applications as well as web applications and would allow other developers to easily add new rules to say how you could and couldn't use the software that was being licensed. There was a lesson halfway through the presentation on how Private and Public keys work to protect your information by encrypting and decrypting it.

We then concluded the meeting with a short presentation from me showing what I had been working on which included showing a site map I had created using XMind on my first day and I also demonstrated the code I had written to control the Busylight, which I have written about it in a previous blog post. 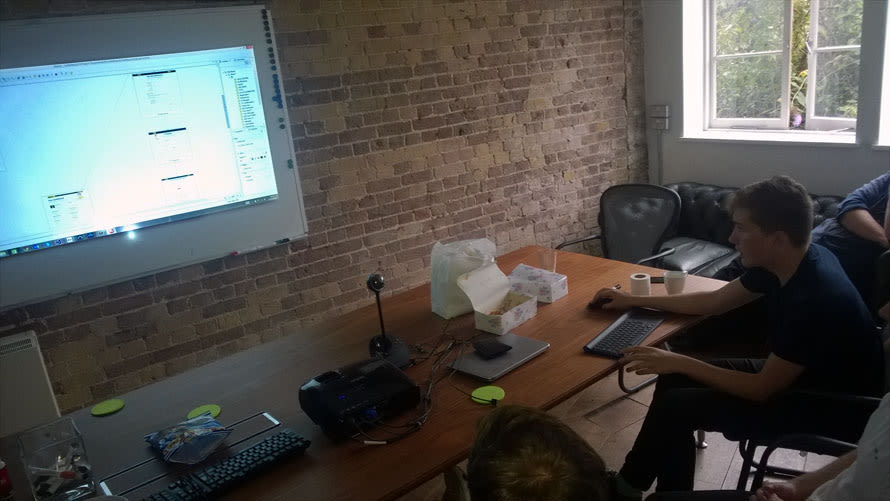 Summary of the week

This week has been a lot of fun and I have learnt a lot from how to work on a project with a team to programming. Everyone is incredibly helpful and willing to answer any questions I have. I am really looking forward to next week after the weekend when I can finally catch up on some sleep!

Adanma spent a week with endjin gaining work experience, to see if a job in the world of Tech is something she'd like to do.

Jack, 15, is spending two weeks at endjin doing work experience. In this post he describes his experience of his first day.