Tag lists are a common means of capturing information

Tag lists provide a flexible means of capturing information, but can often make it difficult to extract valuable insights from the data.

To illustrate how to tackle this challenge, we will process the Star Wars dataset from Kaggle.

We use a number of technologies:

We find this to be a powerful combination of technologies for many data analytics applications. In particular where we want to generate insights from data sources such as CSV files and spreadsheets where the data volumes are in the order of Megabytes rather than Gigabytes.

The first step involves importing the Pandas package and using that to load the data into a dataframe. A dataframe is used to capture tabular data, it comprises rows and columns and is similar to Excel worksheets and Databases tables.

We are focusing on the planets.csv file which you can download from Kaggle here. It contains a listing of 61 planets. Having downloaded the file locally, we use the following Python code to load the data from CSV into a Pandas dataframe. We then inspect the first 5 rows of data using the head() method.

On inspection of the dataframe above, we can see that the terrain column is a string, which contains comma separated categories. For example, the planet Hoth has three categories tundra, ice caves, mountain ranges whereas Dagobah has two swamp, jungles.

We now take a look at the general composition of the planets dataframe using the info() method.

We can see that we have 8 columns, across 61 rows. However, we also note that one of the rows appears to be empty (61 entries, but 60 non-null entries in the name column).

The powerful .loc[] method is used to display the rows where the planet name is null.

So we drop row this from the data set:

Finally, we rename the name column to planet_name to make things easier to follow later on in the process:

This results in the terrain column containing a list object rather than a string object.

Now that the terrain column contains an iterable object, we can exploit this by applying the explode() method to the planets dataframe to create a new planet_terrain_bridge dataframe:

You can see from the output above that the explode() method repeats each row in the dataframe for each item listed in the original terrain column.

We now apply some steps to wrangle this new planet_terrain_bridge dataframe into a suitable form so that can act as a "bridge table". This table will be used to resolve the "many to many" relationship between planets and terrains. This is a common approach in data modelling that we will adopt in Power BI to generate analytics that are intuitive for end users: 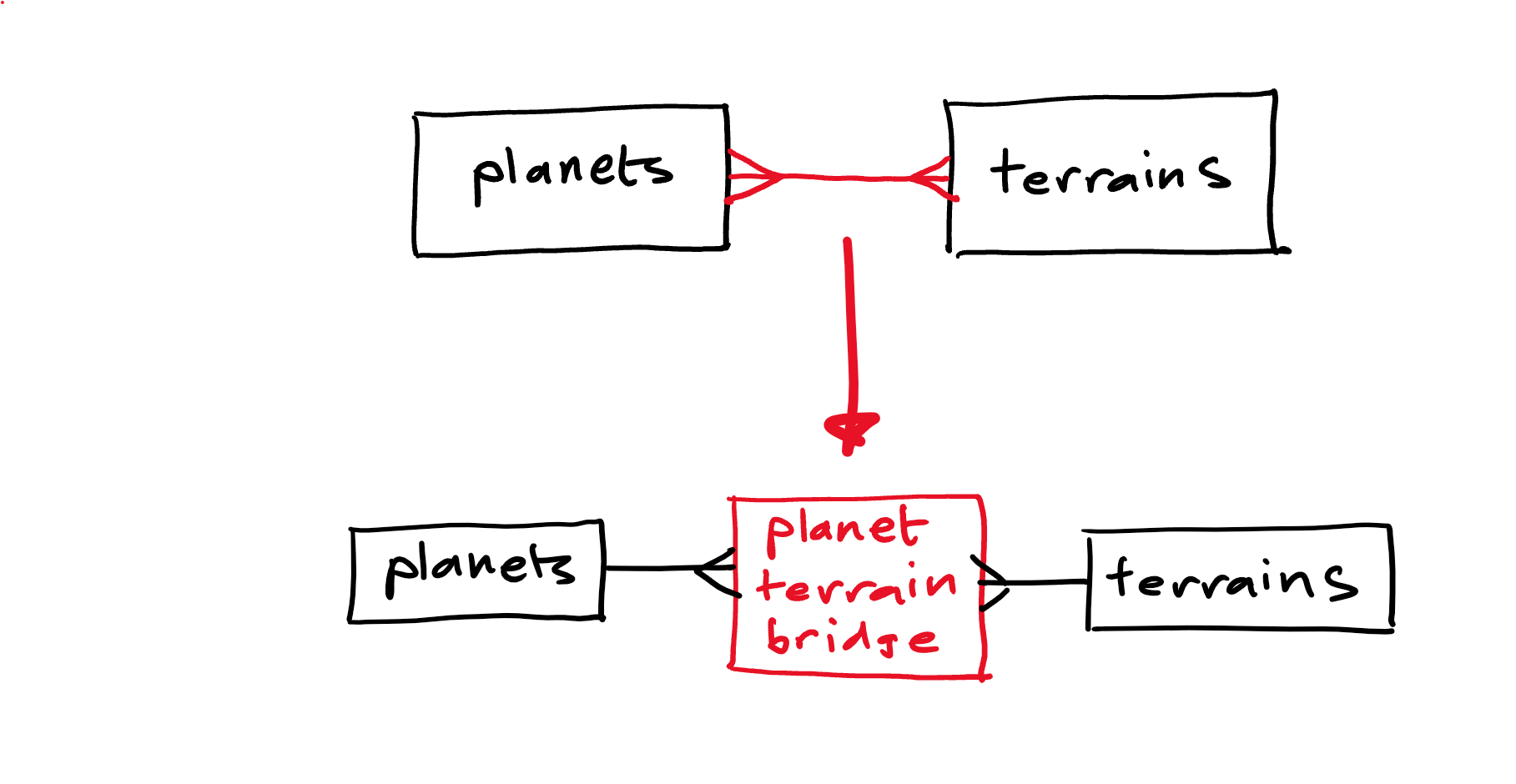 First we trim the dataframe down to the two columns we need: planet_name and terrain. We use the loc[] syntax to do this:

We then note that some of the planets (such as "Umbara" above) do not have a terrain category applied. So we drop these rows from the dataframe using the dropna() method to vreate the final dataframe.

We do not have a master data resource for terrains, so we will create our own by generating a list of the unique terrain codes found in the data.

We can see some immediate opportunities to consolidate the list of terrains. For example, singular / plural duplicates exist for six terrains:

But we'll save these steps for a future blog post!

Now we write the planets data minus the terrain column and the new bridge and terrain dataframes to CSV file so that we can load it into Power BI for analysis.

Load all three CSV files into Power BI as UTF-8 commma delimited text / CSV files. Promote the first row as headers in all cases if this is not done automatically by Power BI.

Once loaded, set up the Model in Power BI so that the planet_terrain_bridge table resolves the many to many relationship as follows:

This should look as follows:

Finally we decide to hide the planet_terrain_bridge in the report view - this is because we do not want end users to use data from this table in reports directly: 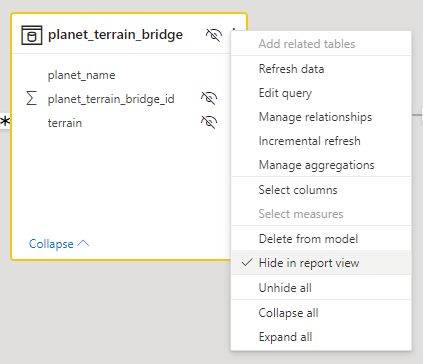 Next we unleash the "power" in Power BI, by creating measures that will calculate results dynamically as users interact with Power BI visuals and filters. These are written in DAX which appears at first to be similar to formulas you may write in an Excel spreadsheet. However, DAX is specifically designed to work with tabular data, and therefore is able to unlock significant value from data held in the Power BI model by generating new insights.

In this case, we create two new measures as follows:

The first measure Terrain Count counts the number of unique terrains in the planet_terrain_bridge table for the given filter context. The use of COALESCE will ensure that the result returns 0 rather than BLANK if the report is filtered to a planet (or set of planets) that do not have a terrain associated with them through the bridge table (there are six of these).

The second measure Planets With Terrain Count takes the same approach as Terrain Count but counts the number of unique planets in the planet_terrain_bridge table for the given filter context. Again coalesce plays a role by returning 0 if the report is filtered to a terrain (or set of terrains) that do not apply to a specific planet:

The final step is to create interactive visualisations using the Power BI model and measures created above.

First, create a stacked bar chart that shows the count of terrains for each planet as follows: 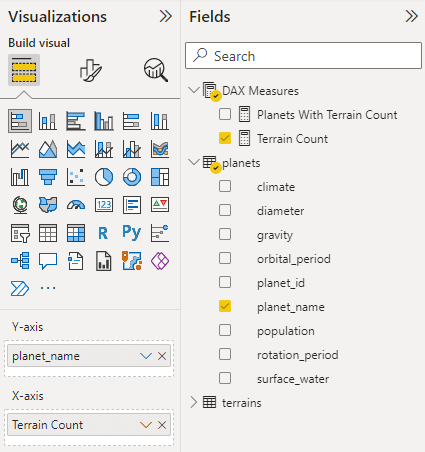 Next, create a stacked bar chart that shows the count of planets for each terrain category as follows: 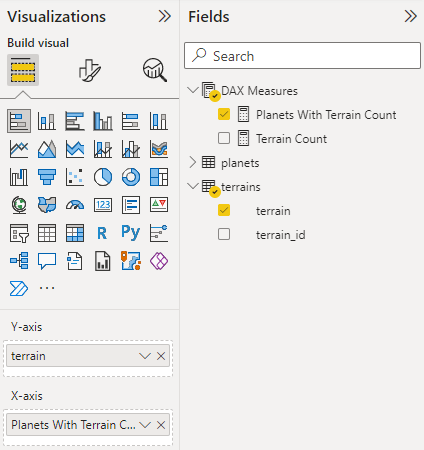 Arrange these visuals side by side on the page as follows: 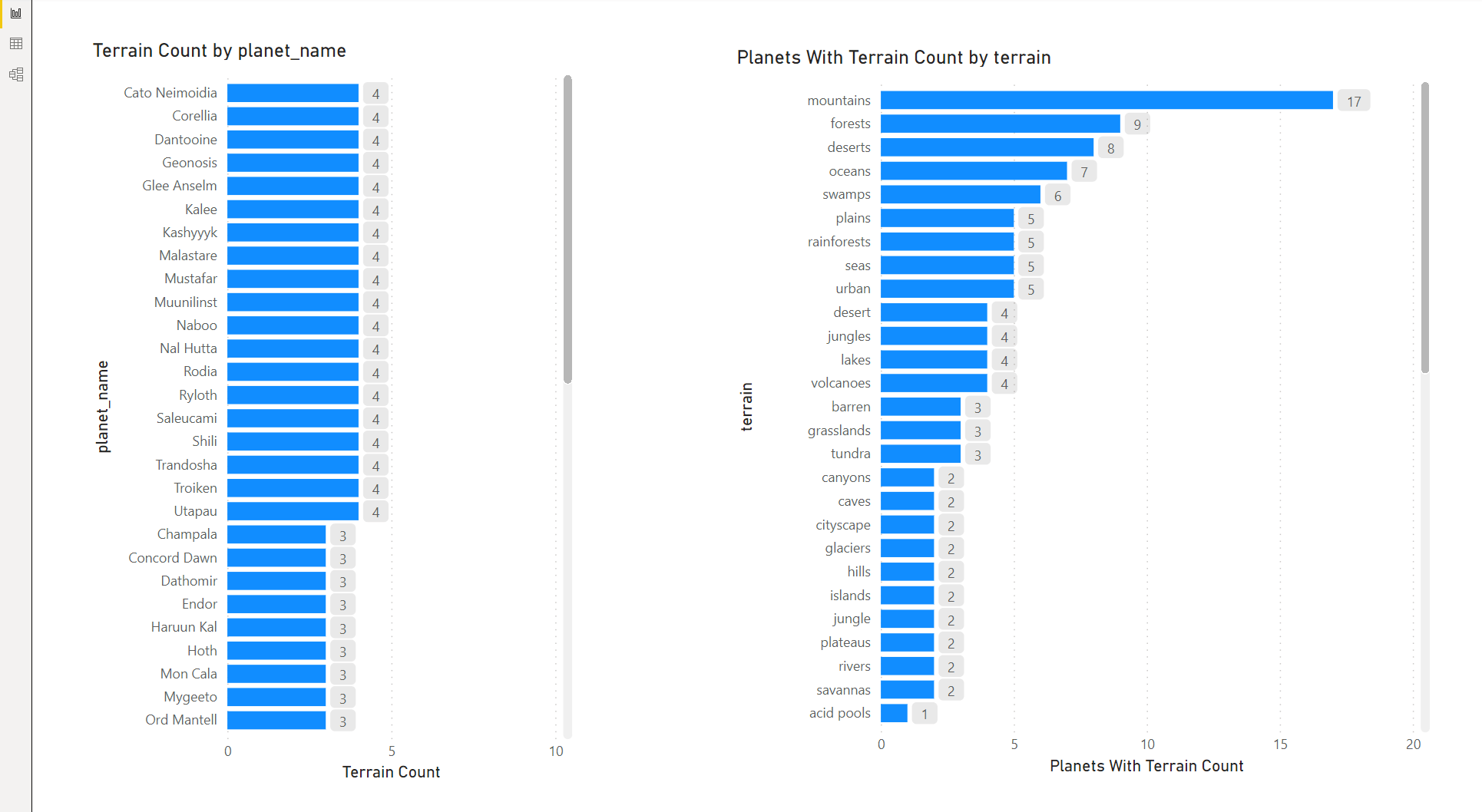 Interacting with either chart causes the other to filter. This starts to unlock the value from the data - for example, if a user wants to explore how many planets have a terrain category of forests, they select this category on the right hand chart, and the left hand chart is filtered accordingly: 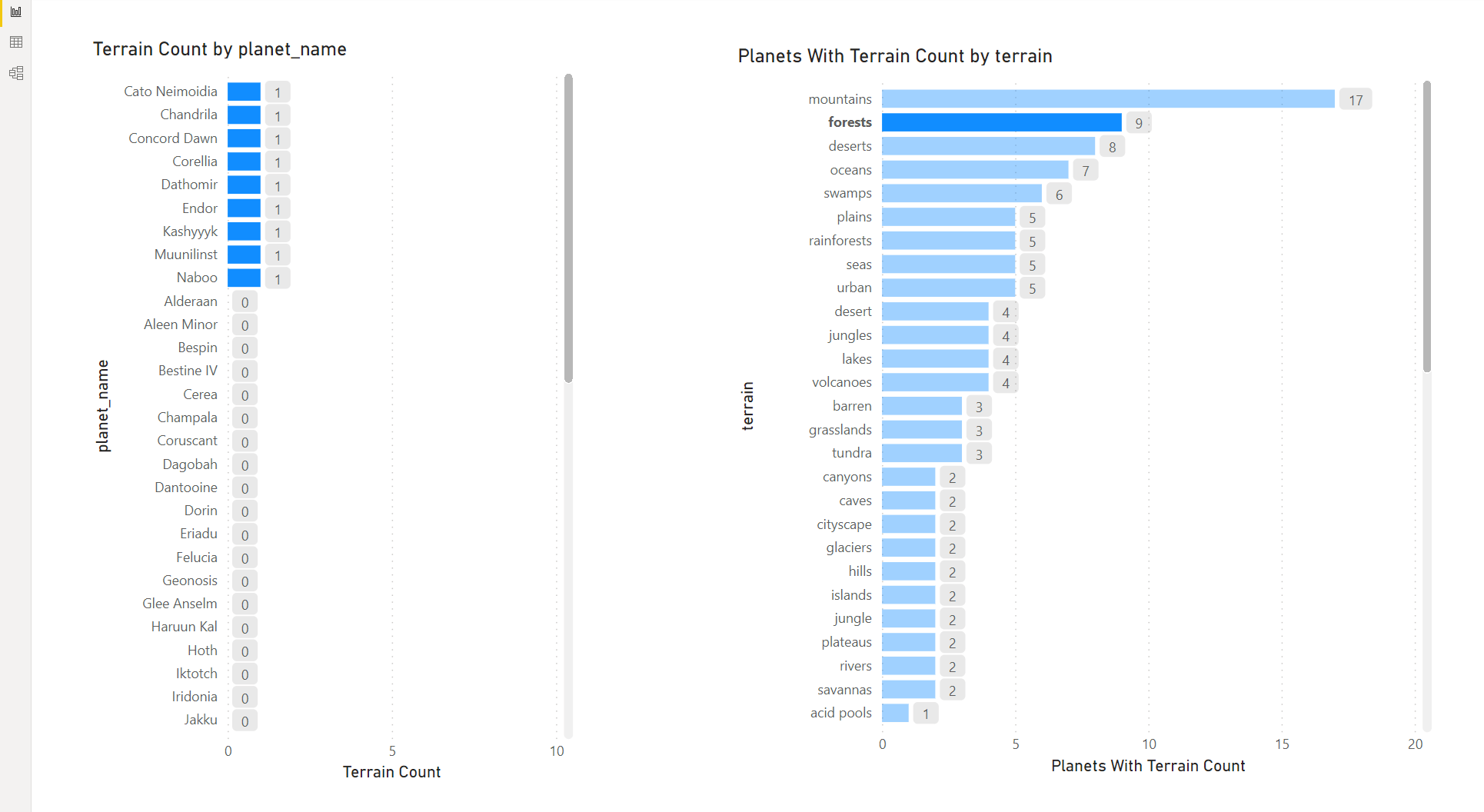 We have set out the basic steps that can be taken to unlock value from data that has been captured as a tag list.

This is based on:

We have also uncovered some of the practicalities of working with data of this nature:

Finally, we haven't applied engineering practices that are essential if the solution was being put into use at scale in a production environment:

These are all questions that I will aim to tackle in future blogs.

Many thanks to Joe Young for publishing the Star Wars dataset on Kaggle.

We describe how to create a high level view of your digital assets, where everything is measured equally and actionable insights can be generated.

A simple toolkit for IT budgeting and planning

We describe how to create a high level view of your digital assets, where everything is measured equally and actionable insights can be generated that allow you to optimise your budget and build a roadmap focused on business value.

In this post, we'll look at how we can bring logic to bear on our problems.
Github Twitter LinkedIn