Never before have technology teams been under so much demand. Technology leaders can struggle to manage these demands effectively, with common anti-patterns being:

All of the approaches above may relieve the pressure in the short term, but will fail to deliver long term sustainable value. Side effects are:

In this article we describe a simple approach that can be used to engage stakeholders such that they:

This approach is founded on three core principles:

To achieve a balance, the different "types of work" need to be defined. This will vary for different organisations, but a typical example for a product based engineering team would be:

In general, teams should seek to reduce effort in the categories of "Releasing" and "Reactive maintenance" by investing in "Proactive maintenance", "Continuous improvement" and "Learning and development". The former categories should be considered an "overhead" whilst the latter categories generate long term value for the organisation by committing to life long investment in people, processes and tools that will drive down the Total Cost of Ownership (TCO).

The categories above may not be a perfect match for your organisation, but the key is to:

The diagrams below illustrates the concepts of ACTUAL, TARGET and TRANSITION, showing an example for an organisation that: 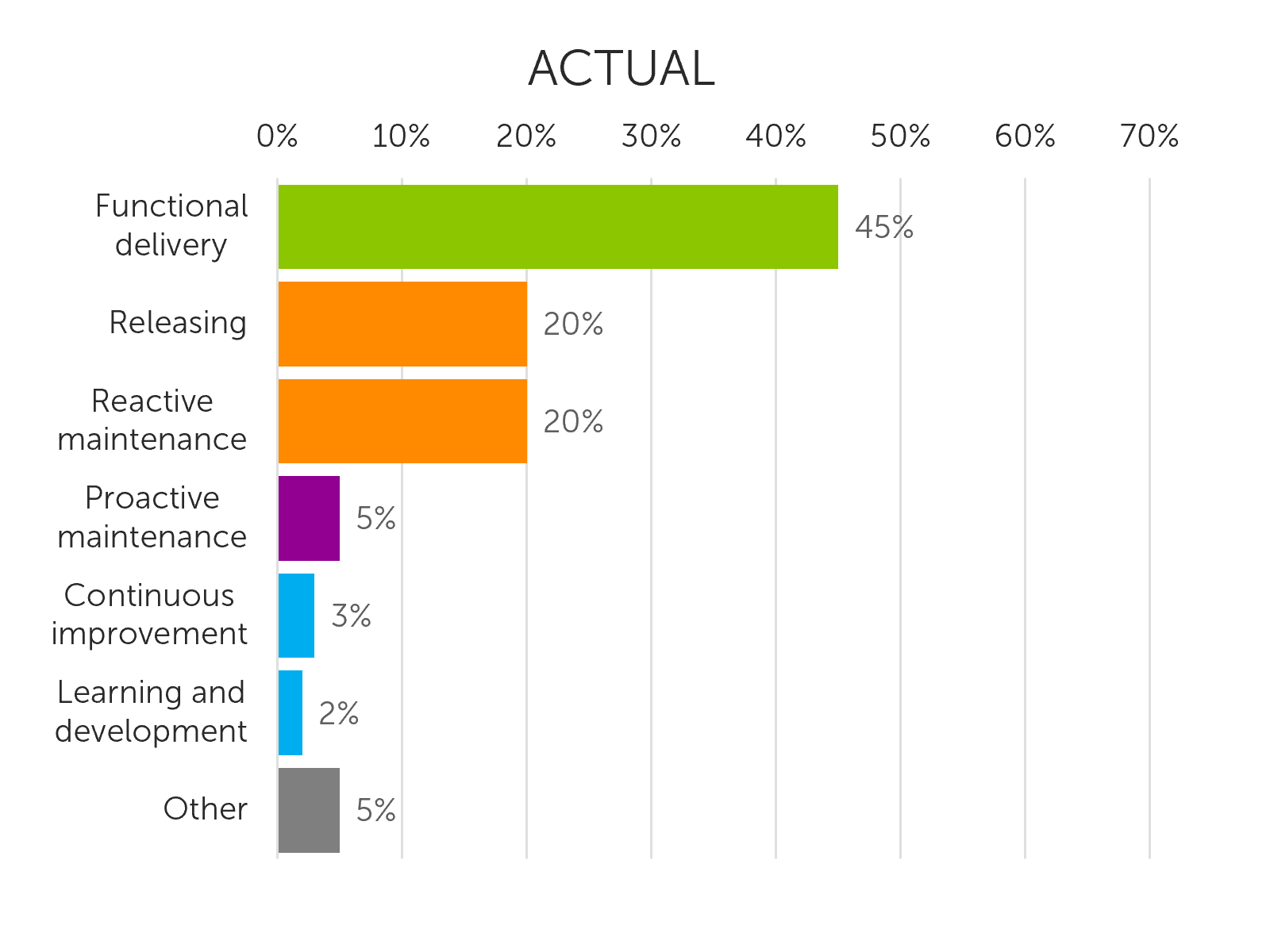 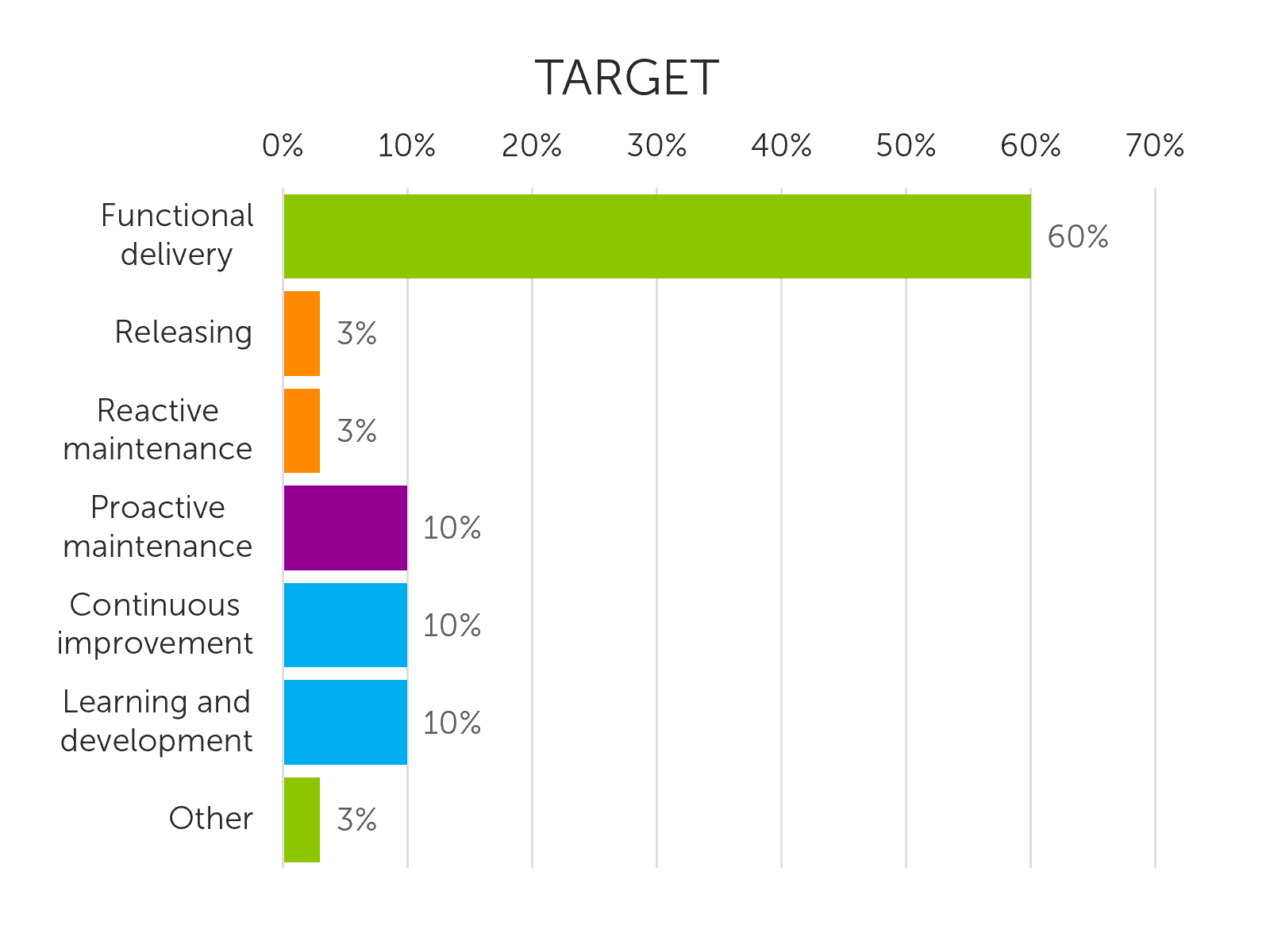 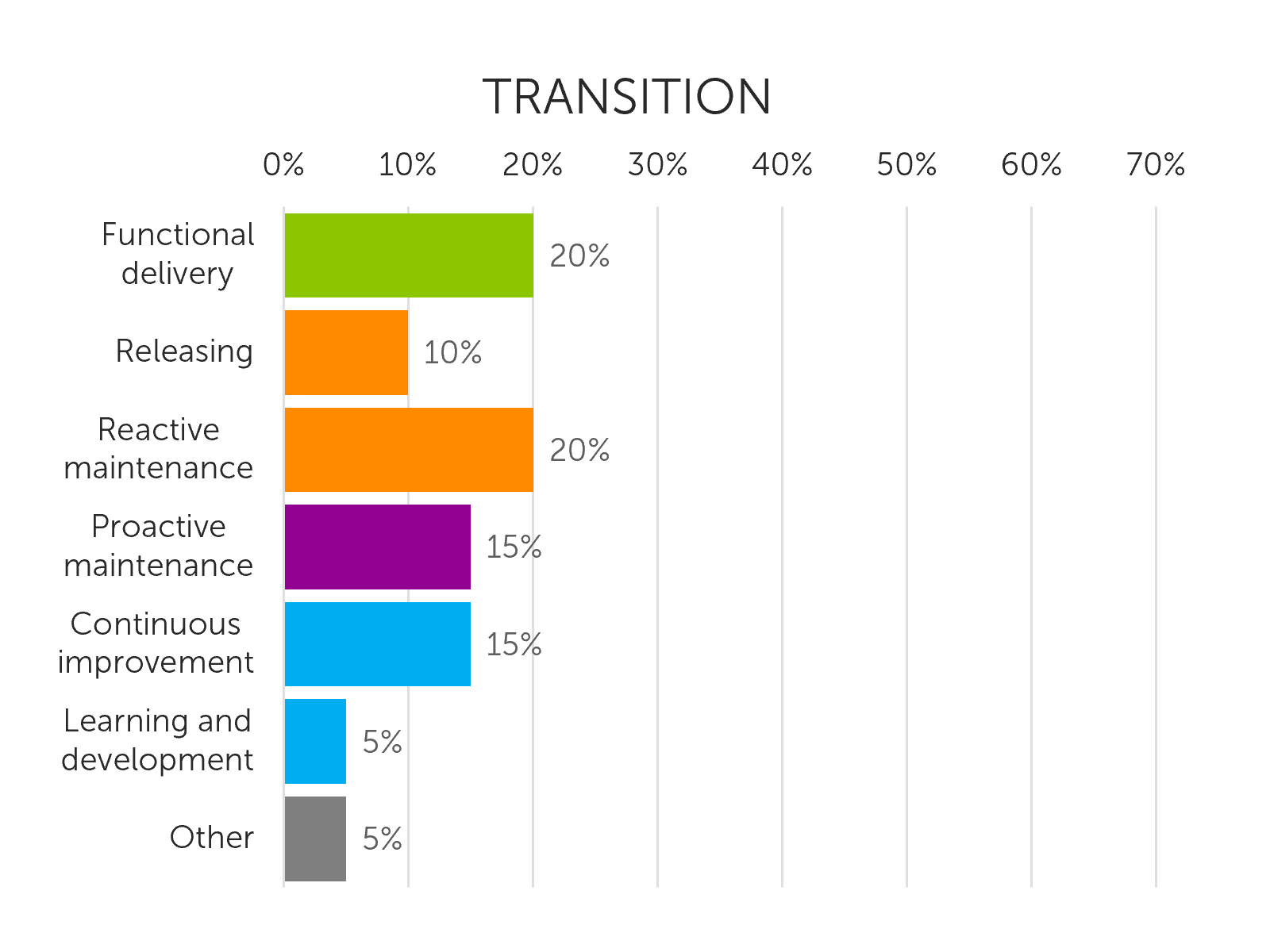 For many organisations being "becoming agile" can become too focused on the strict adoption of methodologies such as Scrum, at the expense of loosing sight of the principles on which it is founded.

A common example of this is where agile is used to carve a large project up into weekly sprints, but where the release of production software is many months downstream - this is commonly called "scrumfall". This defeats one of the key benefits of agile: which is to get features out in front of end users as soon as possible and to use the feedback that they provide as valuable learning to shape future releases - i.e. to enable the "build, measure, learn" cycle.

This can be compounded by the tendency for stakeholders to overload their requirements, because they believe that this is the one chance they will have to build all of the features they "think" end users will require.

This principle of rapid cycles of "build, measure, learn" is fundamental to getting meaningful value out of agile practices. If your stakeholders or your team are not bought into this, there are likely to be more fundamental issues that need to be resolved such as:

The other principle here is that agile practices rely less on detailed planning of the entire project and more on:

Use of visual tools

The use of visual prioritisation supports the two principles above, where:

The prime objective of visual planning is stakeholder engagement. By adopting an approach that is simple and light touch, all stakeholders can actively engage in the process. This promotes collaboration, leads to consensus and achieves collective responsibility.

A generic example of visual prioritisation tool is provided below. In practice it can be implemented using a whiteboard and coloured sticky notes or using a collaboration tool such as Mural.

Here's how the process of visual prioritisation can work in practice:

The benefits of this approach are:

Good prioritisation is not a skill that is unique to the technology domain. Other departments in your organisation will be facing similar challenges, so you have an opportunity to partner with others to share best practice and develop strategies that work for you and your organisation.

In the second part of this series, we take a deep dive into the Swiss Cheese Model and show how this type of threat modelling is essential for understanding the risks that adopting Microsoft Azure post your organisation, and how you mitigate them.

We describe how to create a high level view of your digital assets, where everything is measured equally and actionable insights can be generated.

How to apply behaviour driven development to data and analytics projects

In this blog we demonstrate how the Gherkin specification can be adapted to enable BDD to be applied to data engineering use cases.
Github Twitter LinkedIn