The dangers of technology

I've started both days with talks focusing on "the dangers of technology", or "when technology goes wrong".

Tess Ferrandez kicked off the conference with a talk entitled "We are the guardians of our future", which went through some examples of how AI can go wrong. I think we've all heard of horror stories around recruitment platforms only hiring men and misidentification of suspected criminals who aren't white and male.

But the focus of the talk was really around the fact that in most of these cases someone probably could have looked at the proposition and seen that it was likely to end badly. A mantra of "what could possibly go wrong?" was repeated throughout her talk and succeeded in hitting home the fact that these things need to be considered at all stages of the process. The message of responsibility and consideration for the possible implications of our actions and decisions has been an overriding theme of the conference as a whole.

This was also evident in Troy Hunt's talk this morning around IoT and security breaches. Again fuelled by examples, citing Cloud Pets and tracking watches for children (what could possibly go wrong?), he gave a very strong argument for considering the possible harmful implications of trusting these devices and companies with your data. Alongside this he touched on the responsibility of these companies to react in an open and responsible way when these (almost inevitable) data breaches do happen.

None of this is to say that these technologies shouldn't be explored, and these services shouldn't be used, but using them without full consideration and understanding can lead to unintended and potentially dangerous outcomes.

These two talks also linked in quite nicely with the last talk that I attended. This afternoon I went to listen to Vimla Appadoo talk about company culture and "bringing your whole self to work". She talked a lot about the need for different people, experience and opinions when designing new technology. This resonated extremely well with the messages from the previous talks. She at one point highlighted a case where a identification service failed to recognise facial features in black men. Her point was that though in response to incidents like this people have made improvements around facial recognition software, it should never have got that far.

By promoting a culture of diversity and inclusivity, these conversations and issues should be raised long before the technologies are released into the world. The responsibility exists on developers and designers at every stage of the process to make sure that the necessary consideration is given to all potential risks involved, and this involves including a wide variety of people in these conversations.

Alongside this, she really emphasised the importance of not feeling like you have to cover up parts of your personality and experience in the workplace. Though there is obviously a level of professionalism which is required by the industry, the idea that this translates into certain aspect of your personality being "unacceptable" is a dangerous one. She proposed, and I agree, that by promoting a culture where people are celebrated for their strengths but also accepted for their weaknesses we can unlock a huge potential for creative and inclusive development.

At the start of the talk she really emphasised this point by being open about the difficulties that she has faced at the start of this year, and I was blown away by this openness and vulnerability in front of an audience of people. It's very easy to stand up and say "be yourself!", "don't leave parts of yourself at the office door!" but it's a different thing to put this into practice in an environment where I doubt many of us feel extremely comfortable. I didn't really expect that a conference talk would bring me close to tears today, but here we are… Perhaps I can blame it on the air con. 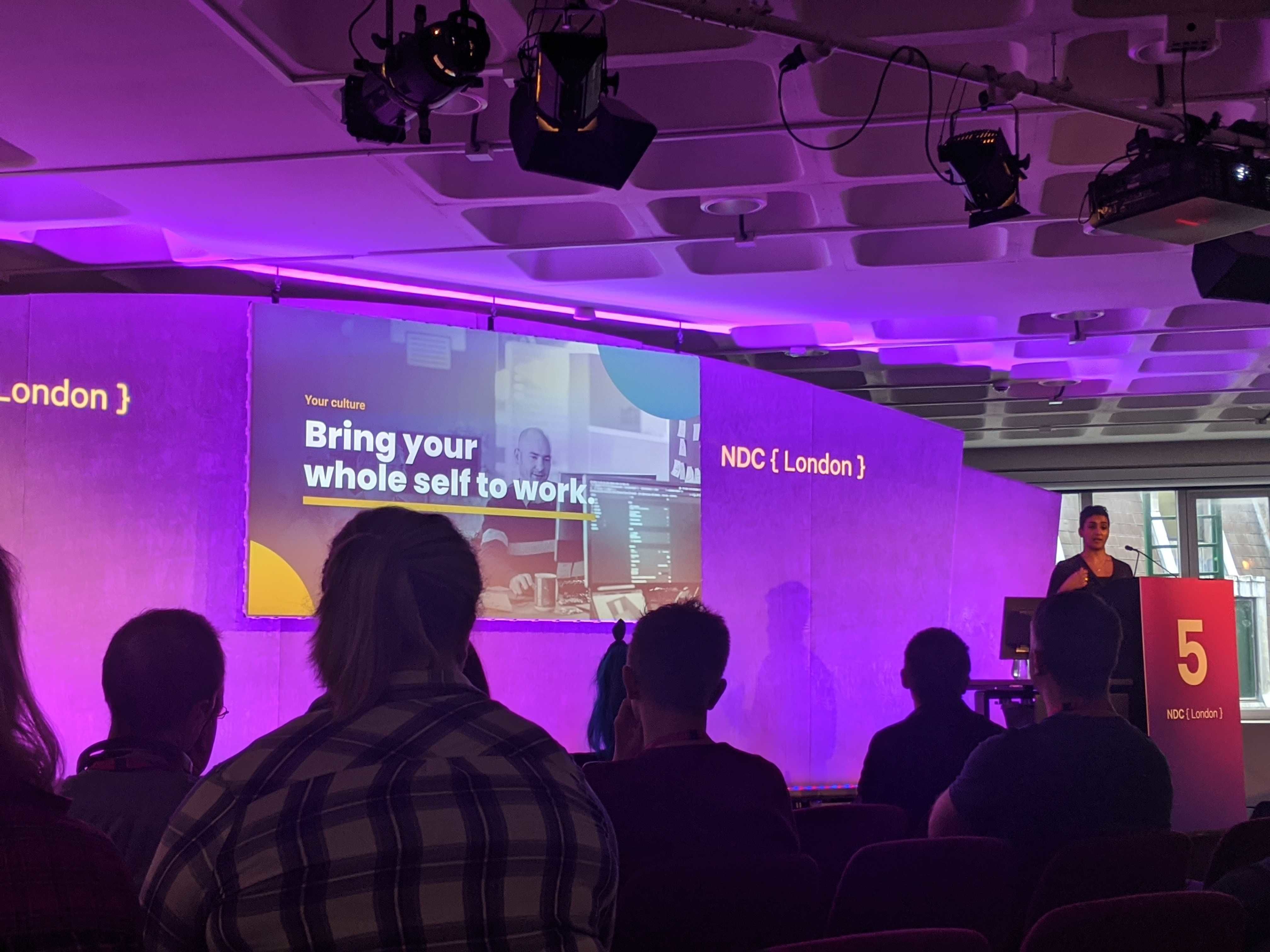 The undercurrent of all of this is the fact that tomorrow afternoon I'm going to get up onstage myself. I think it goes without saying that I'm extremely nervous, especially when in the company of some of the brilliant speakers I've seen so far! And in the spirit of "bringing my whole self to work" I wouldn't say that public speaking would be something that I've ever considered one of my strengths.

But alongside the nerves there is a sense of excitement, I am very excited to share our experience, not only around using some exciting technology, but around a project that I'm extremely proud to have worked on.

I have been over my notes and run through the key points in my head more times than I can count, so I guess all I can say is… Bring on tomorrow! 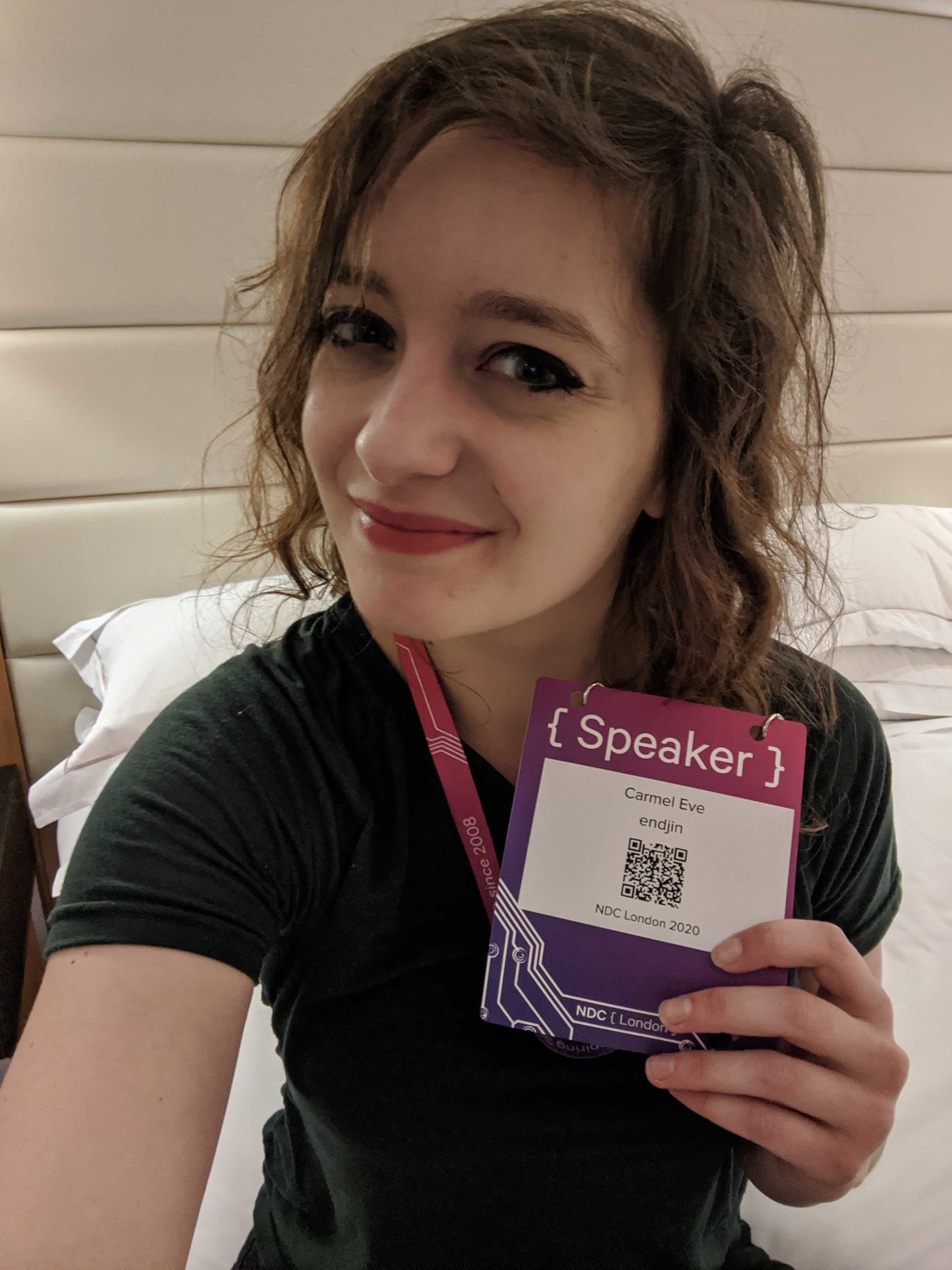 In this post, Ian describes some of the highlights from the NDC London conference

Mental health and managing the challenges of remote working

Remote working has many benefits. It allows us a huge amount of freedom, especially around managing our personal and professional lives. But alongside these benefits it also brings challenges. When you combine these challenges with certain aspects of mental health it can sometimes be difficult to manage. However, there are also ways in which remote work can enable us to control our environments in a way that would be extremely difficult if working from a conventional office. We have been a fully remote company now for over two years, and in this post Carmel shares some of her experiences of managing mental health whilst remote working.

A week in the life of a (graduate) endjineer

During our last few months of recruitment, one of the main questions that we were asked during this process is 'what does your average day look like'. The extremely varied work at endjin made this quite a tricky question to answer, so we expanded the question to be slightly broader - 'what does your average week look like?'
Github Twitter LinkedIn