Barry Smart was the CTO at Hymans Robertson, the largest independent firm of consultants and actuaries in the UK, between 2012-2019. He was responsible for leading the firm's technology strategy, modernising the 100 year old organisation, and transforming them through the adoption of Microsoft's Azure Cloud platform to enable them to innovate faster and produce new digital products and services.

Since 2013, endjin has been helping Hymans Robertson with their Azure adoption process. As a Financial Services organisation, they are regulated by the FCA, and as early adopters of Azure, were at the bleeding edge of storing Personally Identifiable Information (PII) in the cloud. THis meant that they were ahead of the regulator, were breaking new ground, and needed a evidence-based approach to demonstrate to the regulator that they could identify and mitigate the risks of moving to The Cloud.

Since developing this approach, we (endjin) have used it for many different customers; from global enterprises to early start-ups, in many difference sectors. It's a useful strategic tool to help you understand the the gotchas of moving to the cloud, and how you can put people, process and technical barrier in place to prevent the worse outcome from ever happening.

In this three-part series, Barry Smart describes the risk & mitigations analysis process we came up with, and explains how you can use the same process to understand the risk of your own cloud journey.

This is the third and final in the series of blogs about a risk driven approach to embracing Public Cloud technology.

Part 1 described the process I adopted to engage a wide range of stakeholders to bring them on board with adopting the Cloud.  I used a risk analysis technique called the Swiss Cheese Model as a structured way of exploring the risks, mapping out the key controls and consolidating our due diligence.  I then used the one page summary of this model as a key artefact when engaging with stakeholders.

In the second instalment, walked through the Swiss Cheese model in more detail, in the order that we constructed it - beginning with the end (undesired outcomes), then flipping to the start (threats) before completing the middle (barriers).

In this final blog post, I will describe the conclusions of the due diligence process which aimed to benchmark our on premise data centre risk against Public Cloud risk.  It sounds daunting, but the Swiss Cheese Model I've described in my two previous blog posts made this quite a straightforward process.

We cycled through each of the 21 threats in turn and evaluated:

There were 3 new threats that we identified that were not present with our on premise data centres:

These threats are often at the forefront of organisations considering the use of Public Cloud technology under the general theme of "vendor lock in".  They are not unique to Public Cloud and need to be considered carefully.  One common approach is to hedge this risk by engaging with multiple Cloud providers.  However this adds additional complexity and cost, as well as limiting options to adopt PaaS or SaaS services which tend to be Cloud provider specific.

Areas where the risk profile reduces

We identified 7 threats which presented a reduced risk profile given that the "industrial grade" capabilities that Cloud providers were able to put in place based the sheer scale of their operation.  Good examples of this included the level of physical security around Public Cloud facilities and the level of redundancy put in place such as dual connections to the power grid.  These were capabilities that we could only dream of having in our on premise data centres!

Areas where the risk profile is neutral

For 9 of the threats, we felt that the risk profile was neutral.  In some cases, whilst we determined that the threat profile increased with Public Cloud, we also recognised that the increased strength of the barriers adopted by the Cloud provider compensated for this, neutralising the increased threat.  For example, the threat of criminal activity

/ hacking is higher given the multi-tenanted nature of the Public Cloud, however Cloud providers put in place significant effort to mitigate this threat such as sophisticated tools to defend against DDoS attacks and strict logical segregation between tenant subscriptions.

In other cases we felt that the threat was neutral because it was not dependent on the underlying infrastructure - for example, the risk of a bug / vulnerability in application code is the same whether you deploy on premise or onto a Public Cloud platform.

Finally there were a small number of threats where we felt there was an increase in risk:

I am glad to note that profile of both threats above is generally reducing, for example:

However uncertainty still surrounds both areas, in particular given the shifting political landscape in both the UK and USA.

The results are summarised in the diagram below. 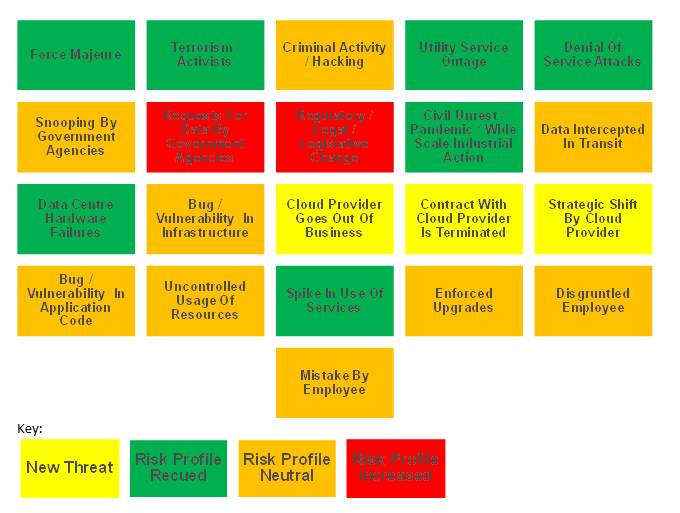 Our overall conclusion was that, on balance, the risk profile associated with Public Cloud was reduced in comparison with our on premise data centres.

When we took this risk based view and combined it with the wider benefits of our PaaS focused strategy, the business case for adopting Public Cloud was compelling: the risks were lower and the commercial benefits offered by PaaS were highly attractive.

We've been using our Swiss Cheese analysis as a means of taking our clients through the risks associated with adoption of Public Cloud and have been successful in helping them to become comfortable with adoption of this technology.  A key trend I have noticed is that we are increasingly not the first to introduce our clients to Public Cloud technology, many have their own programmes well under way or have adopted Cloud hosted SaaS from other parties.

We are keen to take the Swiss Cheese Model approach further.  The hypothesis with application of this model to health and safety is that major catastrophic accidents only occur when multiple barrier fails enabling a trajectory from the threat, through the holes in the barriers to the undesired outcome.

On this basis, the principle is that major catastrophic events can be prevented by putting place leading indicators which are used to constantly monitor the health of each barrier to proactively maintain a minimum level of performance that will  prevent holes developing.

Where the barriers are entirely under the ownership of the cloud Provider, this will be difficult to do.  For example, we would not be in a position to proactively monitor the health of physical perimeter security around the Cloud provider's data centre - we need to trust them to put sufficient monitoring in place.  However, where the barrier is the responsibility of the tenant, it is good practice to establish leading indicators.

We also note that the Cloud providers are tuned into this requirement.  After all, they have a vested interest in helping tenants to have a strong handle on the risks that they are managing.  Solutions such as Microsoft's Security Centre on Azure are a big step in this direction.

If you enjoyed this series on Cloud Adoption, you may like to download the accompanying free poster, check out our Cloud Platform Comparison (AWS vs Azure vs Google Cloud Platform) poster and blog series, or sign up to Azure Weekly, our free weekly newsletter round up of all things Azure.

Despite the subsequent media reporting, the loss of 16,000 Covid-19 test results at Public Health England wasn't caused by Excel. This post argues that a lack of an appropriate risk and mitigation analysis left the process exposed to human error, which ultimately led to the loss of data and inaccurate reporting. It describes a simple process that could have been applied to prevent the error, and how it will help if you're worried about ensuring quality or reducing risk in your own business, technology or data programmes.

In the first part of this series, we look at how you take a strategic look at the risks of adopting Microsoft Azure, and how you report these to C-level execs.

In the second part of this series, we take a deep dive into the Swiss Cheese Model and show how this type of threat modelling is essential for understanding the risks that adopting Microsoft Azure post your organisation, and how you mitigate them.
Github Twitter LinkedIn