By Richard Kerslake Engineer I 18th May 2016

Azure Resource Manager (ARM) is a set of APIs that enable interacting with Azure for creating and managing resources. ARM Templates create a simpler way of automating deployment to Azure, by allowing all the parts of your infrastructure to be declared in the template. Azure itself then handles how that infrastructure gets created including the order of execution and running things in parallel where possible.

Defining infrastructure in this way is known as Infrastructure as Code, which offers many benefits such as being able to keep your templates in a source code repository for versioning and change tracking.

Managing deployments across multiple environments, from development through to production, can be a complicated and challenging process. Octopus Deploy exists to make this process simpler, faster and more feature rich than tacking deployment on to an existing build server or hand rolling your own deployment process.

Octopus Deploy is a deployment automation server, installed on your own infrastructure. It's premise is that it does one thing and it does it well. Where a build server is great at compiling code and running tests, Octopus is great at taking the artefacts that build, configuring them and then distributing them to all the machines and environments that they need to run in. One of the key features that make an Octopus deploy superior to a build server for deployments is concurrency of tasks. Deploying the same package to many different locations concurrently is an area Octopus Deploy excels at.

In an Azure context, this could be useful for provisioning virtual machines that have already been deployed by an ARM Template. Even if you are purely deploying an ARM template full of Azure resources with no additional artefact deployment, there are plenty of other features that make Octopus worthwhile. To name but a few: configuration per environment, all deployments easily discoverable in one place, promotion between environments, and requirement of manual intervention and approval if necessary.

How can you use them together?

The Azure Resource Group Template step type was released with Octopus Deploy 3.3. This makes it really straight forward to set up a deployment process using the built-in step.

The Azure Resource Group Template step requires a Service Principal for authentication. To learn how to create a service principal using PowerShell, see a previous post on the endjin blog  or a similar article in the Octopus documentation.

When adding a new Step to the deployment Process of a Project in Octopus, you'll see the Deploy an Azure Resource Group step type: 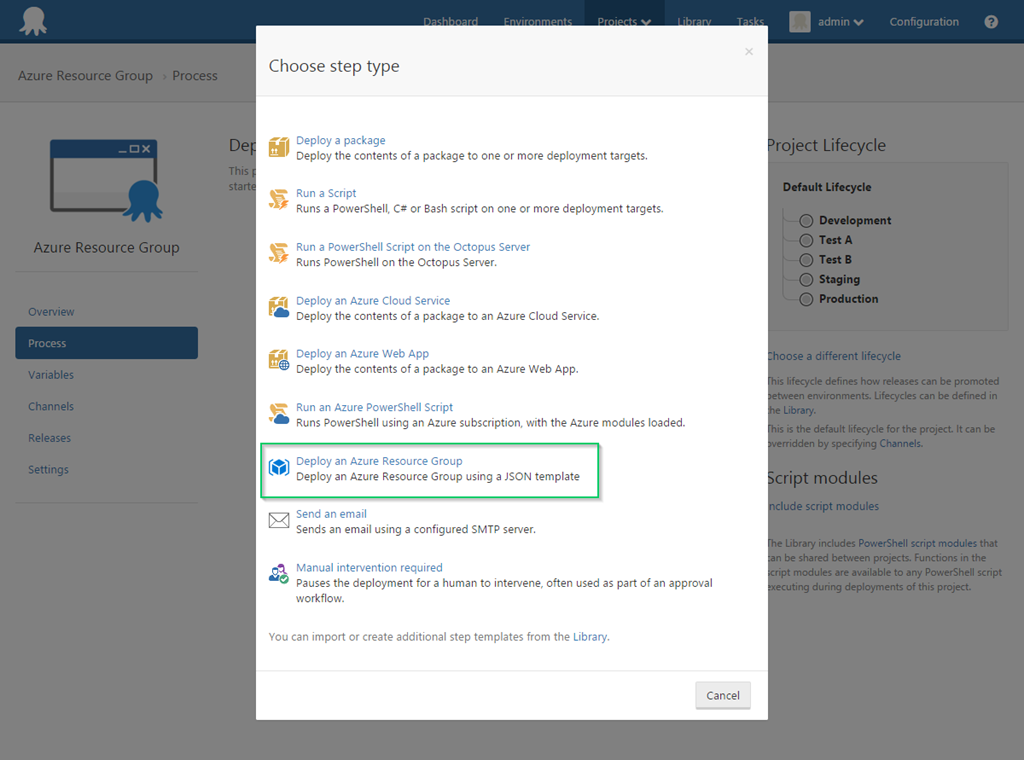 After choosing the step, you'll see a page where various properties need to be completed: 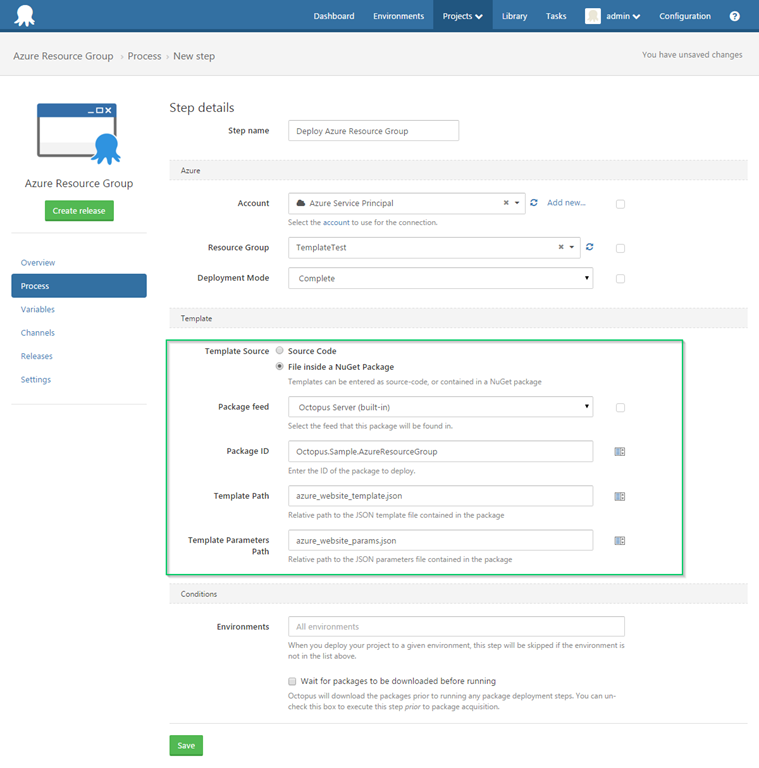 The account type has to be a service principal, which you should have already created.

It is possible to get the JSON template from "source code" which actually means you can paste the JSON directly into the deployment step in a multi-line text box. If this option is chosen the JSON is parsed and the parameters required by the template will appear directly in the step details form. The other alternative is to use a file inside a NuGet package, in which case you need to specify where to get the package, and what the template and template parameters paths are.

It is unlikely that you will have a single step in the deployment pipeline, for deploying an Azure Resource Group. In reality, multiple different types of step will be used for different purposes.

'$GroupName' and '$Location' are references to variables defined for the Project.

In the dialogue that appears, select the 'Run an Azure PowerShell Script' step type. Give the template a name and description. On the 'step' tab enter the PowerShell script from the previous section.

Now when you are adding a step to the deployment process for a project, the list of available steps will include the step template just added, for creating an Azure Resource Group.

While it is possible create an ARM template directly in the Step definition by using the "source code" option, developing the template using Visual Studio has lots of benefits.

There is an Azure Resource Group project type that enables deployment of the template directly from Visual Studio. There is good JSON editing support. It's possible to add some common resources to the template using a wizard UI instead of manually.

Developing the template in your normal environment also means you can integrate with source control and build systems in the same way as you do with the rest of your code.

For example, if a storage account resource is created by the template, values can be set in the outputs section for the name and access key for that storage account. The next step in the deployment process deploys a web app using the storage name and key variables to set a connection string in the web app configuration.

Are you configuring your Azure App Service to use a VNet? The regional VNet integration for an Azure App Service is a preview feature, and so comes with some quirks. One of the documented limitations of this preview feature is that "The feature is only available from newer App Service scale units that support PremiumV2 App Service plans." This has interesting implications as to how you need to deploy your App Service, otherwise you could end up with a rather perplexing pattern of errors. Read about how we came about this error, and how we ended up fixing it.

Creating a package to deploy a web project from the command line (for deployment into Azure) is not as easy as it should be. In this post we cover the whole process.

Azure Resource Manager and PowerShell Desired State Configuration are powerful tools for provisioning and then configuring your virutal machines in Azure. This post delves into the details.
Github Twitter LinkedIn