What is the difference between a measure and a calculated column?

By contrast, measures implicitly do not have a row context. This is because, by default, they work at the aggregate level. So, you cannot refer to columns directly in a DAX measure, you will get an error because no row context exists. This is because the measure will not know which row to choose in the table. In order to reference a column in a measure, you must wrap the column in an aggregation function. As we are aggregating values, it doesn't matter which row we are using, we do not need a row context, as we are just aggregating all of the values in a single column to return a single value. Alternatively, we can create a row context in a measure by using an iterator function. This topic will be explained further in the following section.

The standard aggregator, SUM, aggregates all the rows of a table if it is used in a calculated column. Whenever it is used in a measure, it considers only the rows that are being filtered by slicers, rows, columns and filter conditions in the report (the filter context).

Iterator functions are particularly useful when you need to make calculations using multiple columns or different related tables. Some common iterators include: SUMX, AVERAGEX, MINX and MAXX. Iterators accept at least two parameters. The first is a table that they scan, the second is typically an expression that is evaluated for each row of the table. This expression can be a calculation that includes multiple columns of a table. Once iterators have evaluated the expression for each row in the table, iterators then aggregate the results.

Thus, the fundamental difference between standard aggregators and their equivalent iterators is that iterators have the additional functionality of being able to aggregate expressions, rather than just a single column (Note that some iterators do not correspond to any aggregator).

Iterator functions are particularly useful when trying to avoid creating expensive calculated columns. For example if we wanted to compute the average number of days an order takes to deliver we could achieve this via the following two expressions:

We could first create a calculated column which computes the number of days to deliver an item using the following expression:

Alternatively, you can accomplish the same result in one measure by simply using the iterator counterpart AVERAGEX:

AVERAGEX can iterate the Sales table and compute the days to deliver for each row, averaging the results at the end. By contrast, in the original example, AVERAGE cannot average an expression, so a calculated column is required to compute the expression. AVERAGEX can do this because using an iterator function introduces a row context to the measure. AVERAGEX has knowledge of the current row of the table, thus it is able to compute an expression for each row of the table.

The main advantage of using iterator functions over the standard aggregation function, is that they allow you to create measures that can aggregate expressions by introducing a row context. Thus, removing the reliance on an expensive calculated column which uses more disk space.

Although they compute the same result, internally, they are behaving differently. So let’s explore their different behaviour by looking at the measure ‘Sales Amount’ first:

As measures, by default, do not have a row context, the measure uses the iterator function SUMX in order to create a row context. SUMX will iterate through each row of the visual in which the measure is applied one by one and will apply the formula in that row. It will then will aggregate all of the results at the end by adding up all of the values in each row to produce a total sales amount.

On the other hand, the expression for the calculated column ‘Line Amount’ is as follows:

The calculated column has a row context, it has the notion of current row, so no aggregator wrapper around the expression is needed. The expression above is evaluated for each row of the table. If we look at the table view of the model we can see this in action. For each row in the Sales table, Quantity and Net Price are multiplied together to produce a Line Amount. These values are stored within the model in a new calculated column called Line Amount. 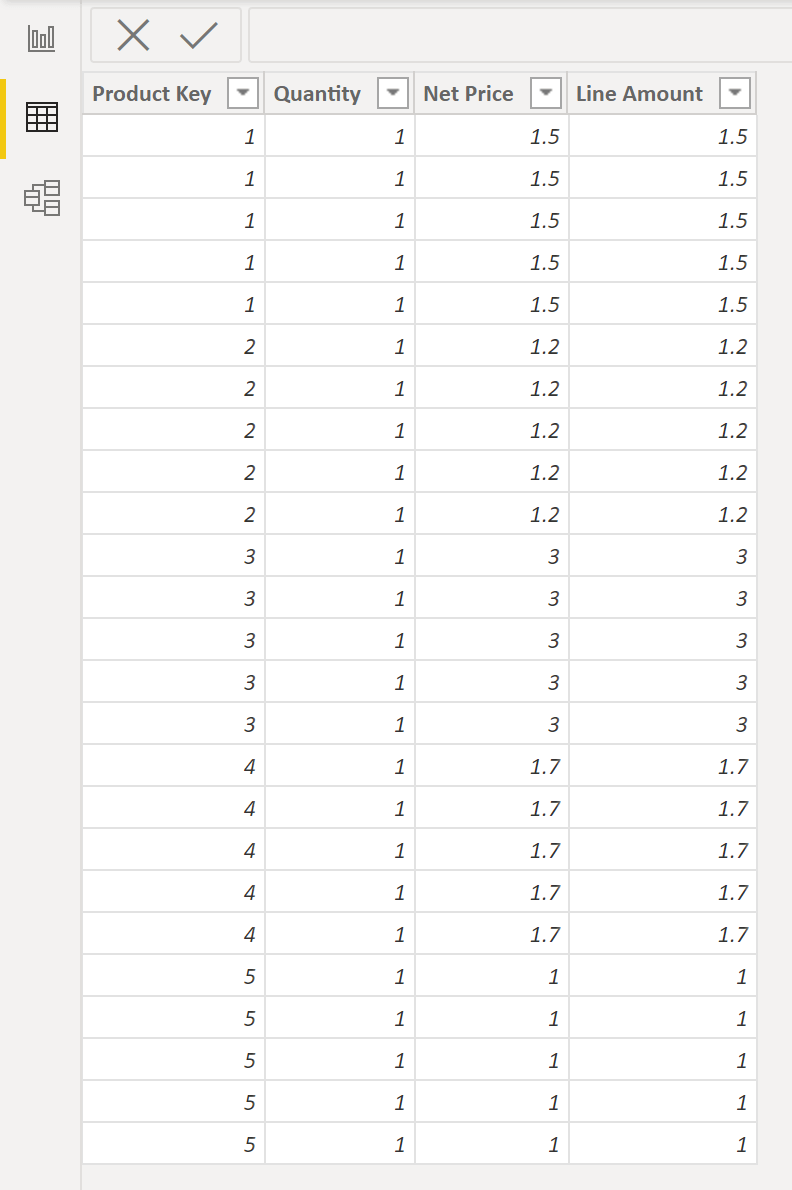 When you are doing computations where using either a measure or a calculated column is an option, such as in the example above, as a general rule, you should choose measures. When it comes to doing calculations of numbers that you want to build into your report and add to visuals, then measures are typically preferred. This is because measures only use CPU, whereas calculated columns use space on both disk and RAM. Thus, it is more space and memory efficient to avoid using calculated columns. This becomes more crucial the larger the dataset.

That said, if these calculations are large and complex, you might need to pre-compute intermediate values in a calculated column. In this scenario, having the expression evaluated at data refresh using a calculated column rather than at query time using a measure may result in a better user experience. In this case, improvements to the user experience through not having to wait for the calculation at query time may outweigh the cost of using more space in your model.

This is the fourth blog in a series about DAX and Power BI. We have so far covered filter and row contexts, and the difference between calculated columns and measures. This post focuses on aggregators. We cover the limitations of the classic aggregators, and demontrate the power of the iterative versions. We also highlight some of the less intuitive features around how these functions interact with both filter and row contexts.

In this third and final part of this series, we learn how CALCULATE performs Context Transition when used inside of a filter context.

DAX is a powerful query language used in tools such as Power BI. In this post, we explain how to better understand the results obtained through DAX formulas by being aware of the different types of Evaluation Contexts and how these affect our code.
Github Twitter LinkedIn

Jessica comes from a Biosciences background, having gained a 1st Class Bachelor of Science in Biology from The University of Manchester.

During the lockdown Jessica used the opportunity to explore her interest in technology by taking two Code First Girls online courses; Introduction to Web Development and Python Programming.

This led Jessica to look for job opportunities in the technology sector and joined endjin's 2021 apprenticeship cohort, which had over 200 applicants.