The quickstart provides a fast and simple way to get running with Mattermost, without the need to learn or install any new tooling. By using Azure Kubernetes Service (AKS), the infrastructure is fully managed for you, and the quickstart handles configuring networking and SSL certificates so you can instantly access the Mattermost application after installation.

Read on to find out more about CNAB and the Azure CNAB quickstarts library, plus a step-by-step guide to installing Mattermost on AKS using the quickstart.

CNAB is the abbreviation for Cloud Native Application Bundles. It's a specification designed for facilitating the bundling, installing, and managing of cloud-native or distributed apps. The specification was developed by a consortium of companies, including Microsoft and Docker.

A CNAB (or a bundle, for short) is made up of three components:

The benefit of all this is that it gives you a bundle format where you can package up your application along with everything necessary to install it. What may have previously been written as a complex series of steps in an instructional readme—or just knowledge inside an engineer's head—can be captured in the invocation container image and installed using any of the tools that understand the CNAB specification.

As CNAB is only the specification, tooling is required to both build and run bundles. Popular tools include Porter, Duffle, and Docker App.

What is the Azure CNAB Quickstarts Library?

The Quickstarts Library is designed to be a collection of bundles that can be used to easily deploy applications, solutions, and samples. It is not limited to Azure, but bundles that make use of Azure resources can be highly optimised.

The library enables authors to build bundles for sharing (currently using Porter as the tooling). It also enables consumers to easily install the bundles, either via one-click button deployments or from the command line in Azure Cloud Shell. More information about how to author and consume the bundles can be found in the repo documentation, and specific guidance to installing the Mattermost on AKS can be found in the section below.

It is hoped that the library will not only offer bundles for users to quickly get started with application, but also provide a way to learn about CNAB and Porter and an opportunity for the community to contribute and share their own quickstarts.

Step-by-step guide to using the Mattermost on AKS quickstart

One of the quickstarts available in the library is 'Mattermost on AKS'. This bundle installs Mattermost on an Azure Kubernetes Service (AKS) cluster.

The bundle does the following:

As mentioned previously, there are a couple of ways to install a bundle from the library. In this guide, we will go through the steps involved when using the 'Deploy from Azure' simple deployment. This method of deployment uses Azure Container Instances (ACI) to invoke the bundle using Porter and also for hosting the invocation image when doing the installation.

Before starting, you will need access to an Azure subscription and permission to create resources in that subscription.

You will also need to create a deployment service principal. The simplest way to do this is to use the Azure CLI tool via Azure Cloud Shell.

In the Azure Portal, open Cloud Shell by clicking the button in the top menu (if you haven't used Cloud Shell before, it will prompt you to create a Azure Storage Account which is used as backing storage). 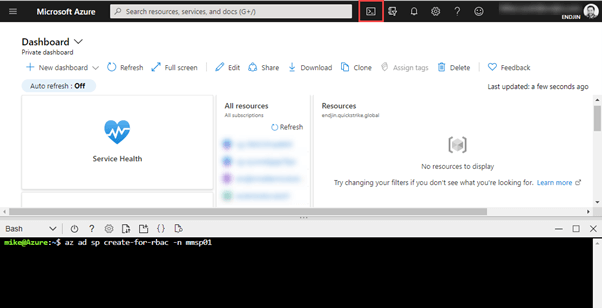 This will create the service principal and output the details you will need later (appId and password). Write these down. Back to the Quickstarts Library: If you open the porter/mattermost-aks folder, you will see a 'Deploy from Azure' button under the 'Simple Deployment' header.

Clicking the button will open the 'Custom Deployment' page in the Azure Portal. 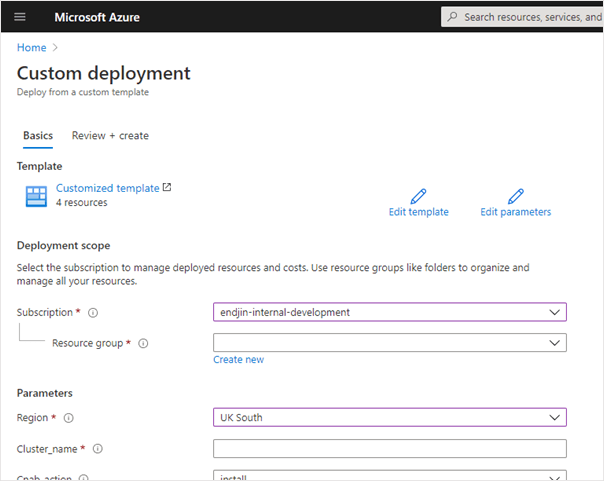 Under 'Deployment scope', select the Azure subscription you want to deploy the solution to and either select an existing resource group or create a new one.

Fill in the parameters: 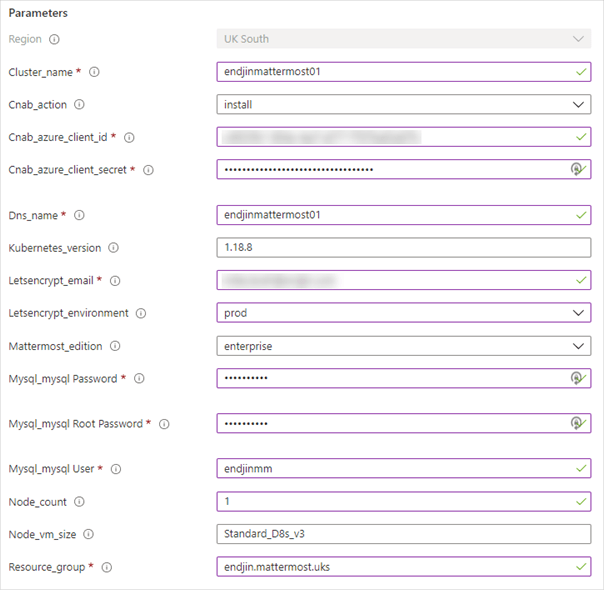 Once filled, click 'Review + Create', then 'Create' to start the deployment.

This will take you to the deployment page where you can see the progress. Here we are creating an Azure Storage account for a persisting state, and an ACI group which will invoke the bundle. When this deployment finishes, select the 'Output' tab and you will see a command you can use to monitor the logs from the ACI container. 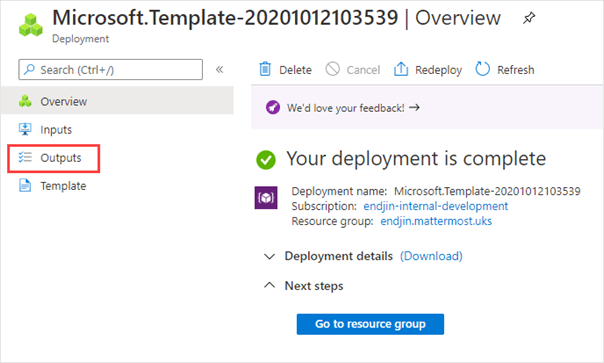 Copy this command, open Cloud Shell and run it in there. 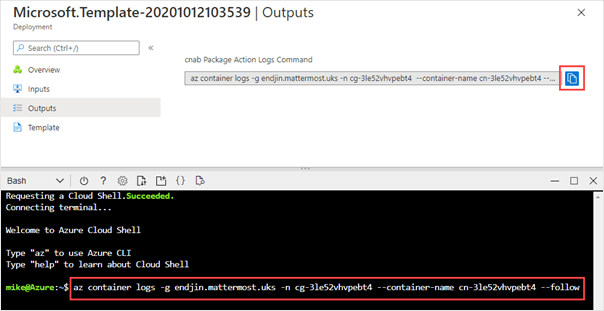 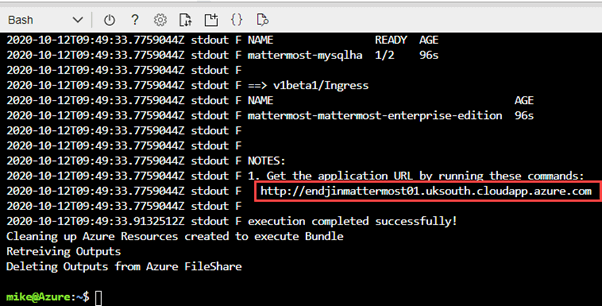 Now you can follow this URL and start trying out Mattermost running in Azure. 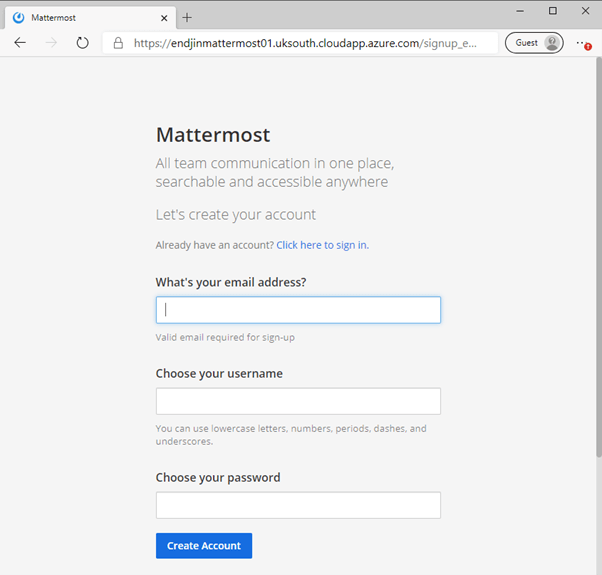 How can I contribute to the Azure CNAB Quickstarts Library?

The Azure CNAB Quickstart Templates we've created are only half the story. Much of the work we've done over the last few months involved the authoring, contribution and DevOps pipelines required to support an open source project. The project is inspired by the original Azure Quickstart Templates - which over the last 5 years has grown to over 850 templates. In this post we're going to explain how you can author CNAB templates and contribute them.

In partnership with Microsoft, we have released Azure CNAB Quickstarts Library on GitHub. CNAB (Cloud-Native Application Bundle) is a new specification designed for facilitating the packaging, installation, upgrading and uninstallation of cloud-native solutions in the cloud, on-premise or on the edge. We've created a number of quickstarts covering Apache Airflow, Azure Kubernetes Service, Ghost, Kubeflow, SQL Server Always On and Wordpress to help demonstrate the power of CNAB and Porter.

We often come across spreadsheets and CSV files that contain features which are a list of tags or categories. This blog article walks through a simple way of extracting insights from this data using a combination of Pandas for data wrangling and Power BI for analytics and visualisation.
Github Twitter LinkedIn