Recently I attended a course to learn how to apply the process of Getting Things Done (GTD) - which is a productivity workflow based on the book Getting Things Done: The Art of Stress-free Productivity by David Allen. In this post I'll write about an overview of GTD based on what I learnt on the day, and what I took away from the course.

The workflow is based on 5 fundamental steps:

This is the process of collecting and recording anything ("stuff") that has your attention, which moves it out of your head (where it requires energy and focus to track) and into an "in", which could be, for example, a paper in-tray, a notebook, or a mobile app.

For me, this was one the most important takeaways of the day. Whilst I was previously doing this in some capacity, I was capturing most things, and the things I did capture were scattered across multiple mediums (Google Keep notes on my phone, scribbled on paper, flagged emails, etc); now I'm trying to capture everything as soon as it lands, and all in the same place (in my Todoist inbox - see 'Installing the System' below), which means I'm not worrying about whether or not I've remembered to capture something, and if I have, where I captured it.

This is the thinking process, going through the "stuff" you have captured and deciding:

This process is always done in conjunction with Clarify; based on the outcome of that step, you need to move the item into a relevant list if it is actionable (see below), or file it in a reference system, or move to an incubation system if you may want to complete the action at some later date.

It is a key part of the workflow to constantly update and review your system, which includes doing a weekly review (see below). This is the step that I probably practiced the least previously, so I am interested to see what difference it will make to start applying this.

The previous 4 steps then enable you to be confident with your decisions (by choosing actions from your organized list, based on what current context/time/resources allow) and be fully engaged with the task at hand (by not having to worry about other tasks, since you are confident they have been captured in your system and have been or will be clarified & organized).

Lists play a vital part when organizing; the main types of lists are:

The weekly review is an important part for managing the system. It involves putting aside time each week to:

The principles of GTD can be applied using almost any set of tools you like. I'm currently in the process of setting up my system using the Todoist app, but there are examples of people using simply pen and paper, or other apps/services such as Outlook, OneNote, EverNote, Google Apps, Trello, etc.

Here is a screenshot of my in-progress Todoist GTD setup: 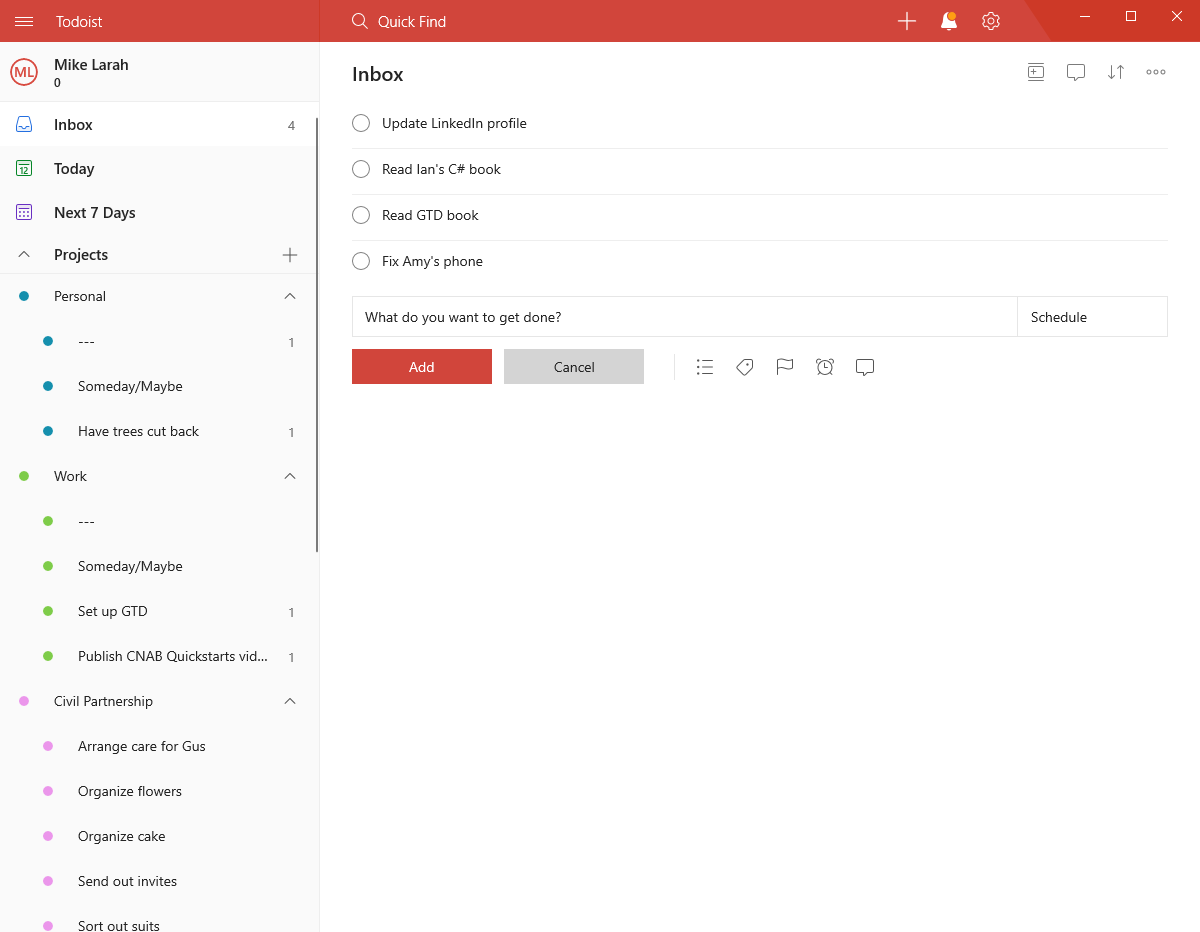 As I mentioned earlier in the post, I'm using the Todoist inbox as my "in" to collect inputs, and have set top-level project categories for Personal, Work, and Civil Partnership (as I have decided that this is currently occupying enough of my time to warrant its own top-level category!) where I move actions into once they have been clarified.

I think the key is to find a set of tools that work well for you, and that you are likely to be comfortable using on a daily basis with minimal friction.

GTD is a methodology for increasing productivity and reducing stress by putting in place a system for capturing, organizing, and clarifying life's inputs so that you can reflect on and be fully engaged with whatever you are doing. I hope to see an increase in my own productivity once I have my system in place and running - I will report back in a few months time.

Big Data LDN: highlights and how to survive your first data conference

Here are some of the highlights form this year's Big Data LDN conference.

Many data projects fail to deliver the impact they should for a simple reason – they focus on the data. This series of posts explains a different way of thinking that will set up your data & analytics projects for success. Using an iterative, action-oriented, insight discovery process, it demonstrates tools and techniques that will help you to identify, define and prioritize requirements in your own projects so that they deliver maximum value. It also explores the synergy with modern cloud analytics platforms like Azure Synapse, explaining how the process and the architecture actively support each other for fast, impactful delivery.

How to apply behaviour driven development to data and analytics projects

In this blog we demonstrate how the Gherkin specification can be adapted to enable BDD to be applied to data engineering use cases.
Github Twitter LinkedIn