To use this feature creating a new schedule is required - all existing schedules prior to the release of this feature will be stored in UTC.

Specifying a timezone in the portal looks like this: 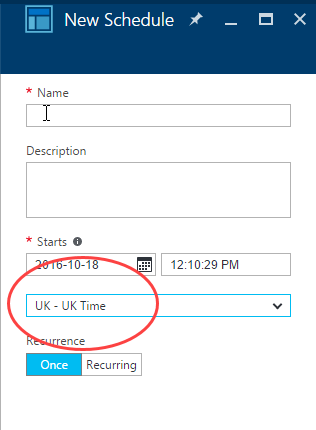 Daylight saving time (DST) is the practice of moving clocks forward by one hour during summer months, so that the evenings are lighter.

Everything in Azure runs in Coordinated Universal Time (UTC), which is the primary time standard by which the world regulates clocks and time.

Azure Automation allows you to define time based schedules to run PowerShell workflows by. These schedules allow you to set a period of hourly, daily or a one-off, plus a start time. The start time input uses your local system time. 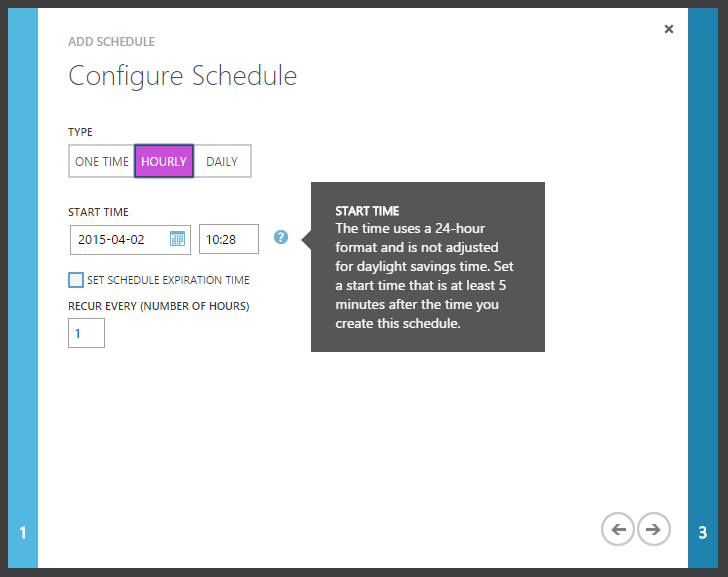 The clocks changed on 29th March 2015, so my local time zone is now BST (one hour ahead of GMT). Ideally, I would want the schedule to still be running at 09:00 in my local time, as it is starting a bunch of VMs that I want running during office hours only (to save some money!). However it is still saved as 09:00 UTC, which is 10:00 BST. Any Runbook associated with that schedule is now running an hour later.

Vote for this to be addressed

There is currently an open feedback item for this to be improved, so feel free to vote it up!

A note on schedules

At this point you are going to try and edit your schedules, to be back to the right local time.

This limitation means you might want to design your runbooks and schedules in such a way that the schedules can be reused across as many runbooks as possible. For example, have a generic schedule called DailyAt9AM, that does exactly that. That will at least limit the number of schedules you have to recreate.

In my previous post on using Automation to control when VMs are running, the Runbooks where generic and had parameters to determine which VM to start/stop. These parameters must be defined when you create the schedule, so using this approach you actually have few runbooks and many schedules, as opposed to the suggestion just made.

Generating and using a certificate to authorise Azure Automation

We've improved our approach for saving money by turning off our virtual machines outside of office hours. This post explored how to do it using graphical runbooks.

Using Azure Automation to run VMs during office hours only

One of the strongest selling points of cloud computing is that you only pay for what you use. Running virtual machines can become expensive, but you can save significant money if you turn those VMs off outside of office hours.
Github Twitter LinkedIn