Endjin spend a lot of time working with start ups and businesses who are pivoting into new product areas. They are usually operating under fierce resource constraints, and this has an impact on the way in which they can approach their development program.

We've evolved a principles-based approach to the new product development process which can be applied to a wide variety of businesses. It's based on the MIT disciplined entrepreneurship approach, incorporating great tools like the Value Proposition Canvas and the Business Model Canvas.

In this series, we're going to look at an example of a "lean" new product development process, applying these principles, and looking at some of the caveats.

There are 10 parts in the series, of which this is part 4.

5) Getting to paying customers

10) Organizational structures to support this model

In the last section we sketched (in some detail) our value proposition, and had a first pass at tuning it to fit the needs of our beachhead market. Now, we're going to think a bit about the competitive landscape, and where our offering fits.

OK - before we start looking at our competition in detail, we're going to do a bit of introspection. What is the single thing that we are going to excel at? What is it about our business that makes us particularly likely to dominate the market.

What does that mean? Let's pick an example. Microsoft's core (even as late as Spring 2014) was essentially "Windows Everywhere". Windows on your PC. Windows on your Servers. Windows on your Phone (*hem*), Windows on your Games Console, Windows in your car, your fridge... They projected that core out with a network of supporting behaviours: market domination, ISV community and partner strategies, OEM strategy, product innovation - but the core was "Windows Everywhere". It defined what they delivered and how they delivered. Linux version of Office? No thanks. Undermines the core. .NET on Mac/Linux? No thanks. Undermines the core. It was a core that lost them some friends, but was undeniably a colossal success.

However, by 2014 the cracks were starting to show. Apple dominated the tablet form-factor, and Android the mobile market. No printers or scanners or cameras ran Windows. Amazon's AWS had a huge foothold in the emerging cloud market, and Google Apps threatened Office's dominance from the same direction. By late 2014 (and under new leadership), Microsoft redefined its core. 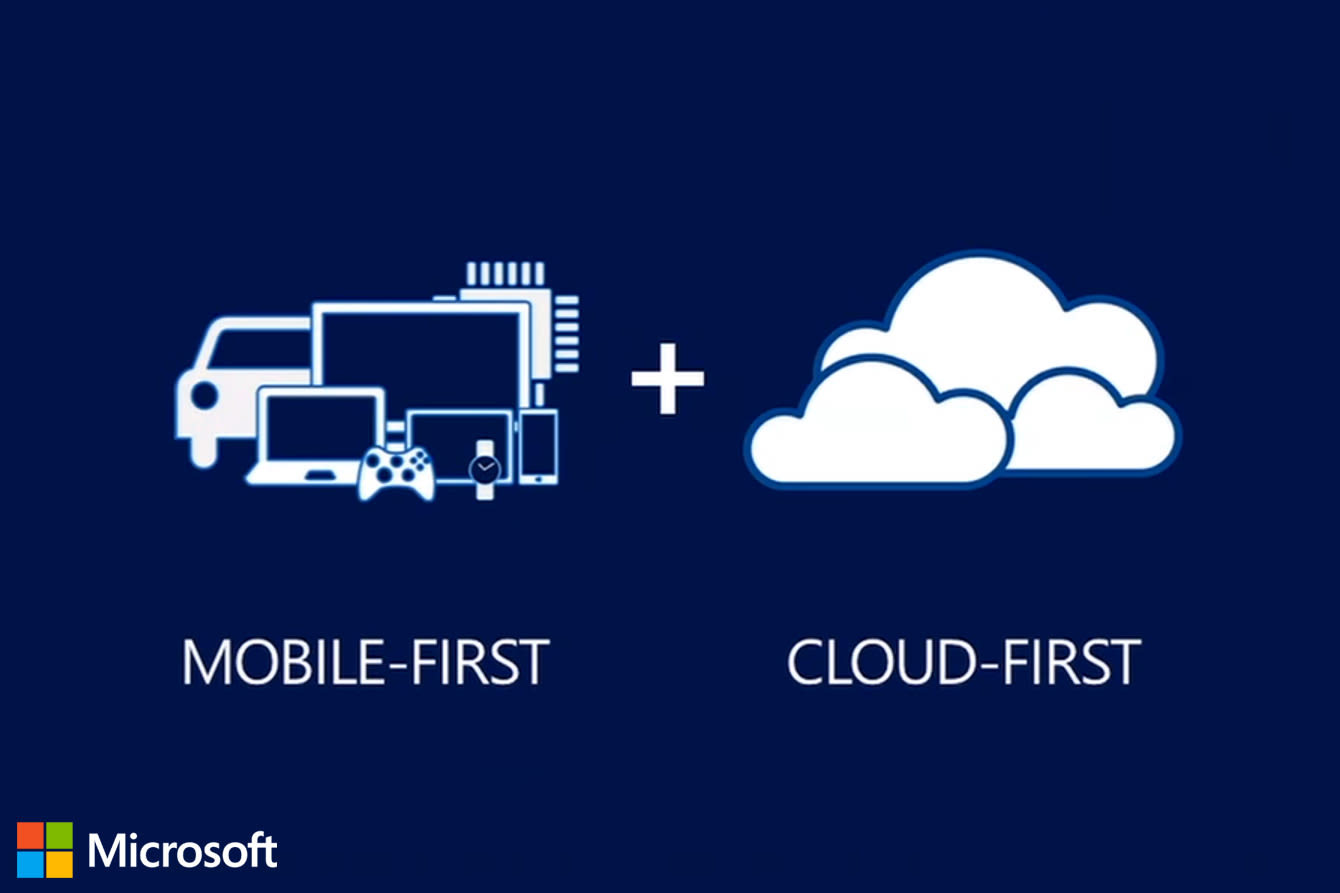 It was now "Cloud First, Mobile First". No mention of Windows in the core, for the first time in 25 years. Microsoft believed (with considerable evidence) that they could excel at this. The whole organization had to undergo (and is still undergoing) a huge mental and logistical shift to come to terms with this change - by redefining its core Microsoft is becoming a completely new business. All previous assumptions have to be validated against this new core (and most won't pass muster).

OK, you're not Microsoft. But even if you are a start-up with a couple of founders and a total employee count of 2, it is easy to lose track of (or never really define) what your business is. If that is the case, you start talking (and working) at cross purposes. Messages get mixed, and customers don't really understand what you're about.

The core is more of an attitude or direction within your chosen market, than a definition of what you are delivering.

So, for example "Innovating with Intellectual Property" is not a business core. Nor is "First Mover Advantage". Those are the outer defences that may (or may not) protect your core.

However, "Never knowingly undersold" or "Community First" could be your core.

The first says that we're going to validate everything against price, and we're making a promise to our clients that they can come to us in the knowledge that, for a given class of product, we will be cheaper than anyone else.

The second says that we're going to validate everything against its impact on our community - our users, and their extended network. We're going to be mindful of their social conscience, help them to connect, whatever it takes.

The key is not to pick a core that you aspire to, but something concrete that you are confident you can deliver on - something that will become the defining heart of your operations that everyone can understand (including people who come into the business later), and align themselves to.

We find that a mind-map is a great way to brainstorm your core - and its supporting behaviours. Red/amber/green dotting the most important parts can help you identify areas of agreement (or disagreement), and then distil your core into a few words. 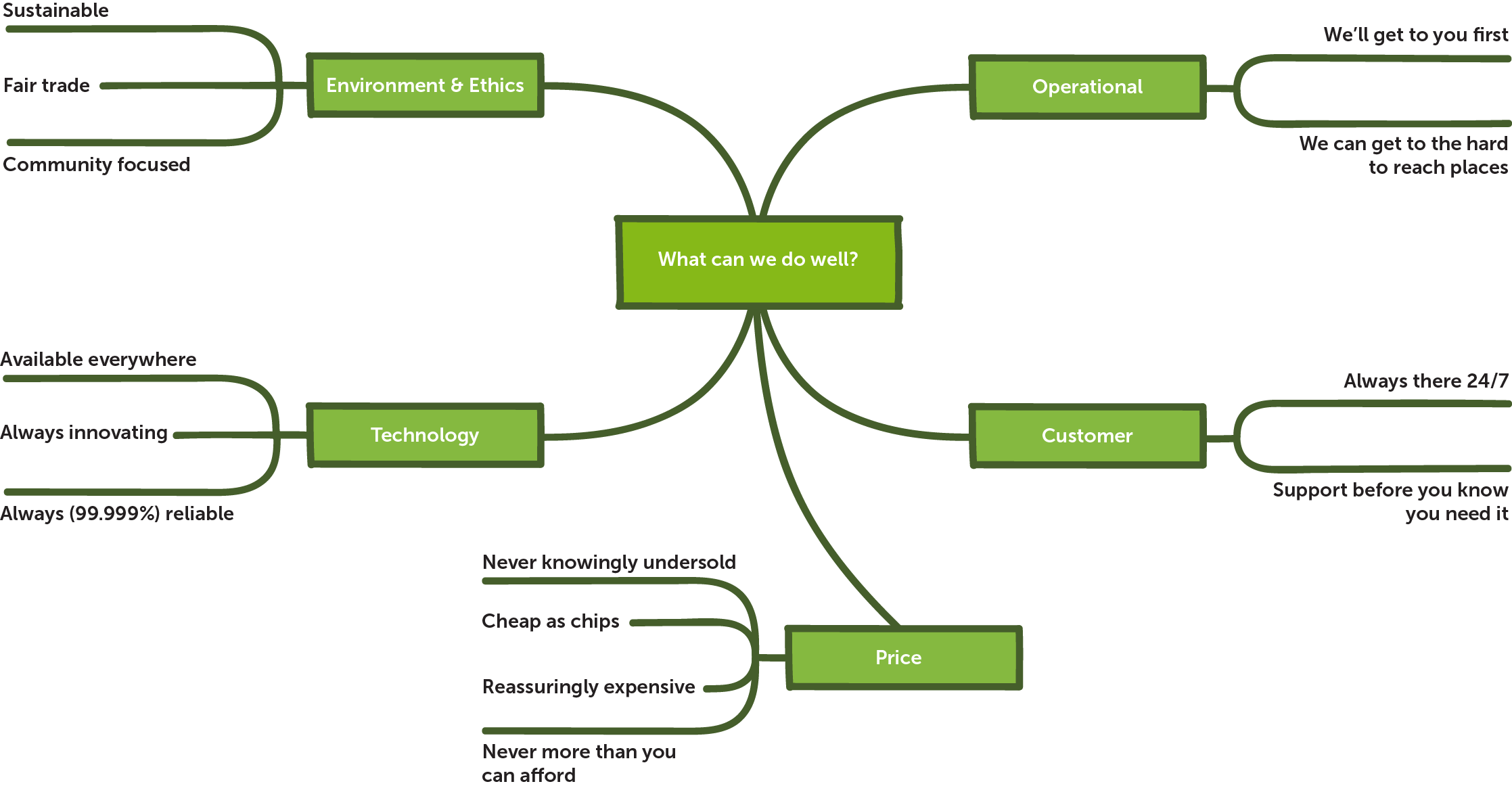 Or you might excel at discounting to a mass market:

"Starbucks, but half the price"

Each of those statements tells your customer who you are, but it also helps you to focus your whole business on what's important to your success.

From this point on, whenever you do anything in the business, you ask "how does this contribute to our core"?

For example, when you're buying stationery, or planning a trade fair, or commissioning some artwork, the "Fair Trade, Fair Price" coffee company might think "How does this help us keep the price low?", "Does this supplier have a fair trade policy?".

If it impacts negatively on the core, then you shouldn't be doing it.

If it has no impact on the core, it is either unnecessary (so don't do it), or the decision is not a significant one.

A fist-fight breaks out about what your core should be.

Joking aside - this can actually be one of the more contentious parts of the new product development process, and agreement here is the foundation for the success for your business.

Now, we're going to look at our competitive position, but, again, we don't want to dive into too much detail. Too often, we can be drawn into producing a half-baked version of a Gartner report. Having said that, we're going to use a technique similar to Gartner's magic quadrant.

To do this, we go back to our customer persona, and pull out a list of their key priorities with respect to our product, and order them by importance.

This is a great thing to do with your actual target customers - devise a simple survey to have them pick the 3 most important features from a list of the ten that you have brainstormed with a focus group. In a second question, have them pick the one they can't do without from the same list.

Let's assume our target consumer is a design bureau who are in the market for a printer. Their priorities might be as follows:

From a combination of desk research and the interviews you did to map out the whole customer life cycle, identify the competitors, and position them on each axis, according to how well it meets (or is perceived to meet) that customer priority.

Here's an example for a printer manufacturer. 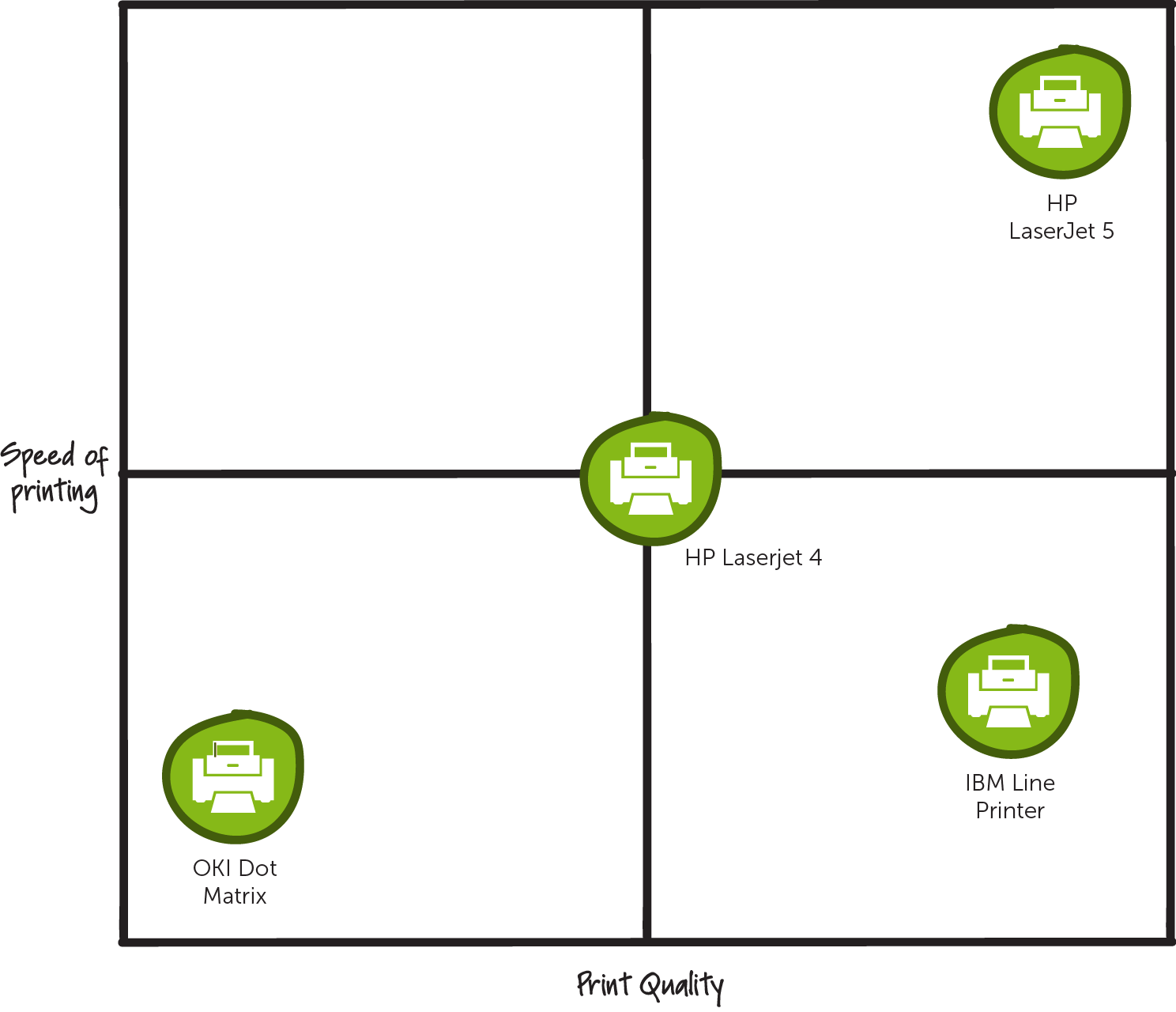 It is pretty easy to see whether your proposition stands out against the competition (high in the top right corner), or is lost in a crowd of "me-too".

Of course, you might have a bunch of other differentiating features that help your product to stand out, but if it doesn't have a strong story for the customer's top priorities, then it is always going to struggle.

So, we've defined our competitive focus, and drawn a first sketch of our competitive positioning. And along the way, we've started the process of engaging with our customer base. In the next part, we'll look at what it will take to get from first awareness to paying customers.

Read more in the series

Although you do not want to lose focus on the beachhead market, it is always good to consider the TAM for follow-on markets. If we do this thing, where might we take it next?

Step-by-step guide to bootstrapping your new product development – Part 5, Getting to paying customers

Ultimately (however long you can put it off for by taking investment), you don't have a business if people aren't paying you more money than it costs to develop, acquire the customer, deliver it to them, and support them for their whole lifetime with the product. We look at how you can get to paying customers.

In this article, we look at how we're going to tidy up our assumptions list, conduct some more low-cost experiments to satisfy ourselves we know exactly what we're getting into, then take the leap and build something that satisfies some core part of the value proposition, and persuade some customers to buy it.
Github Twitter LinkedIn