This blog describes two tools I used last year to take some of the work out of a repetitive refactor.

The tools were Visual Studio's Find tool, with a regex, and Resharper's Search by Pattern feature – I compare my experiences with the two here.

The refactor – adding a class to certain html elements

As part of some work updating one of our applications to use Bootstrap 3, I wanted to search for instances of a particular pattern, and alter those instances.

The aim was to add the class 'form-control' to any html input elements which didn't have that class, and which did have the type attribute 'text'. (In Bootstrap 3, textual input fields with the class 'form-control' get 100% width). These elements were scattered liberally throughout the solution, and it seemed like there should be a better way to alter them than by searching for all input elements and manually checking each one, or even finding all input elements matching this pattern and manually updating each one.

If you're a fan of regex puzzles, you may want to work that one out before looking down!

I initially tried searching for these elements with Visual Studio's Find tool, applying a regular expression. Since Visual Studio 2013, this applies .NET regular expressions, replacing the earlier custom regex syntax used by 2010 and earlier. You enable a search using Regexes by using the full search menu (Ctrl + Shift + F, or Ctrl + Shift + H to replace), checking the 'Use Regular Expressions' box in the Find Options area. 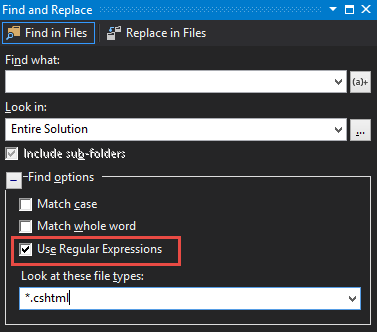 As usual I used the regexr site to write and test the regex.

I used a negative lookahead (this specifies a group that can't match after the main expression) to fill in gaps between the pieces of text I wanted to match on.

Here's the process I went through to build the regex:

It's not pretty. If you are a regex fan you can probably think of a better way of doing that. It also assumes that attributes values will always be wrapped in double quotes.

With the match functional, I was able to find all the elements in the solution that needed updating. The next step was to use the replace option to automatically update these elements, inserting the class 'form-control' where it wasn't present. I needed to check capture groups 2 and 6, and if one of these was populated, retain the group, but insert a value of 'form-control'. If neither were populated, I needed to insert a class attribute with the value 'form-control'.

Visual Studio provides some pre-set options for substituting text based on a regex:

… but none of these seemed like exactly what I needed.

At this point, I'm afraid I decided to move on and look at other ways of carrying out the substitution. If you know a way, using a regex substitution, please let me know in the comments!

I'm using ReSharper 9, although this feature (with some differences in behaviour) is also present in earlier versions going back to ReSharper 5.

Search by Pattern provides a language-aware, higher level abstraction for identifying text than a regex. It understands the types of entities that you might be searching for in different types of files in a solution. 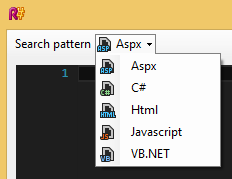 Rather than writing one large regex for your entire desired match, you define the 'placeholders' (language entities) that you want to check, and then write smaller regexes for the content of these placeholders. In the case of html files, placeholders can represent tags, attributes, attribute values or content.

This means you don't have to worry about writing a regex to pick out the entities such as attributes whose values you want to check.

It also makes searching for strings where a particular string is not present a bit easier - there is a 'Should not' option.

Once you've set up placeholders, you add them to a search canvas using a \(placeholderName\) syntax.

I started off with this pattern:

I also needed to capture all the other attributes, so they could be added back in in the replace stage.

For this, I used an attribute placeholder, without specifying any regex for the attributes it should match.

Here's the pattern I ended up with:

I was worried that the order in which the placeholders were added would affect the results, but this appeared not to be the case. The search offers a 'match similar constructs' option, which according to ReSharper's introductory blog about the search feature, searches for "constructs that are semantically identical". This option is checked by default, but even when this was unchecked, my search pattern matched elements with both type first, and class first.

The \(attributes\) placeholder will mop up any remaining attributes without you having to worry about excluding ones you've matched already, or the relative order of the attributes.

So next, the replacement.

According to ReSharper's introductory blog about the search feature, "the replace pattern can be any text that is valid for the language you're using, plus placeholders if you need them".

For elements which contained a class attribute, I reused the placeholders from the original pattern to add back the element, and its original class and other attributes, adding a class value of 'form-control'. 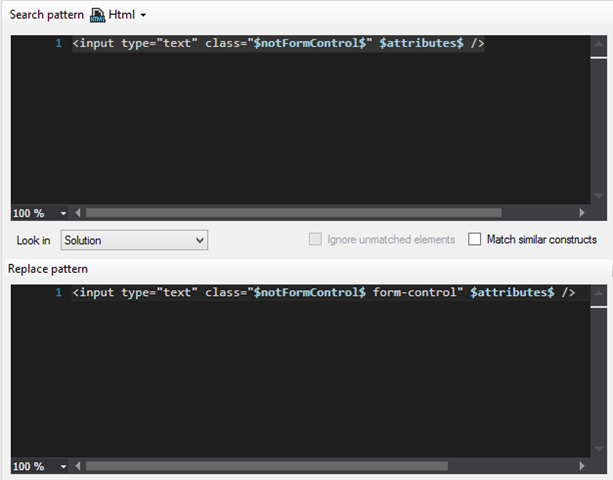 For elements without a class attribute at all, I used the following search and replace patterns, where the \(attribute\) placeholder matched any attribute without the name 'class': 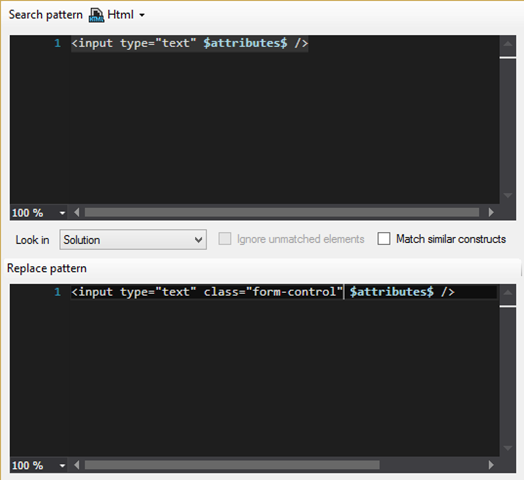 There's a video of the refactor being carried out using these two patterns below.

A key feature of ReSharper's search by pattern function is that you can save patterns and re-use them at later dates, on the same or other code bases.

Once a pattern has been saved as a custom pattern, you can set it to show as a suggestion if you come across a match while working on the solution at a later date, letting you apply the refactor as a quick fix (Alt + Enter). You can also specify the suggestion text and the quick fix text (the default text is the pattern, which might not make sense out of context).

There's a video showing how to save a pattern, set it to a suggestion, and apply a quick fix below.

Resources for using search with pattern on the JetBrains site:

Many thanks to Matt Ellis (@citizenmatt) and Hadi Hariri (@hhariri) from ReSharper for their helpful advice on using Search by Pattern.

In this post Alice reflects on her first year at endjin as an Apprentice and her thoughts on programming, development tools & methodologies, cloud computing and what may lay in store in year 2.

In this post, we explore tag helpers, used in web applications using ASP.NET Core. We look at some examples of tag helpers and their uses, and learn how to create custom tag helpers.